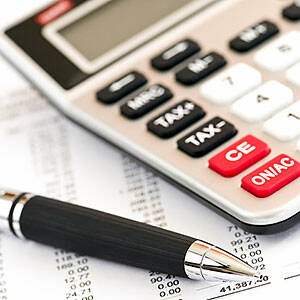 Most divorce cases of the mega-rich never reach court. The details are usually mediated by a retired judge.

Head of Mills Oakley family law team, special counsel Michael Paul said going to court could sometimes be like rolling a dice in divorce cases of the mega-rich: there’s an element of chance in how the court will allocate the assets.

Mediation is often the cheaper and usually safer option when it comes to deciding huge divorce settlements, Paul said. The mediator, in a position of authority, can evaluate the case and advise on what a court would be likely to do anyway.

“What we’re all on about is if you possibly can do a mediation, there’s a bunch of retired judges out there who for about $5,000 to $8,000 a day will do a mediation, plus they will need a fee for reading time before hand,” Paul said.

“Sometimes it is helpful to have senior counsel at a mediation and this adds to the expense.

“You can do neither [go to mediation or court] until there has been what’s called appropriate disclosure of all financial records.

“It becomes a pretty expensive process to get real estate valuations and forensic accountants to give an evaluation of companies and businesses, it’s very, very costly.”

But mediation can fail, and some big money cases do end up in the Family Court.

Paul said there were big unknowns in taking a big money divorce case to court.

“If you ask half a dozen lawyers, given a certain set of facts, what you see the results as being, you would probably get about three opinions across a bit of a range,” Paul said.

“That’s why it’s a bit of a roll of the dice. The judge now gets allocated to you quite early so you know what could possibly happen so you plan and negotiate accordingly.

“But on the whole even when you go to court surprises do occur not withstanding discovery.”

What’s interesting is in many of the multi-million dollar divorce cases which have made it to court, the wife has received less than half of the assets.

This table gives an indication of how assets have been split in divorce cases where tens of millions of dollars are at stake. It first appeared in a case over which Justice Peter Murphy presided over in 2012. Justice Peter Murphy awarded the entrepreneurial husband 60 per cent of the assets and the wife has since appealed, so “it’s not the last word,” Michael Paul said. 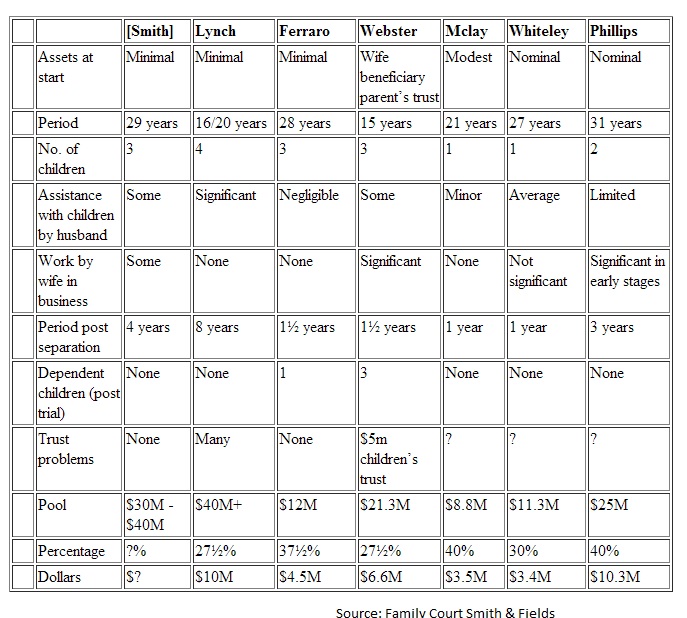 When these big cases with asset values between $8.8 million and above $40 million have been decided by a court, the wife has in some of the authoritative cases received less a lot less than half of the assets.

For example in the Lynch case, with an asset pool valued at over $40 million, the wife received 27.5 per cent or about $10 million.

In that same case the couple were together for 20 years; the judge deemed the husband’s assistance with the children was “significant” and the wife did not work in the business.

In the Ferraro case the court deemed the husband’s assistance with the children as negligible and the wife did not contribute to the business and she was awarded 37 per cent of the assets.

But in the Phillips case the court found the wife made “significant” contributions to the business in its early stages, the husband’s contribution with the children was found to be “limited” and the wife was awarded 40 per cent.

“If a wife has done significant work in the business then that should be looked at as a significant contribution on her part that cuts down on his,” Michael Paul said.

“It doesn’t seem to have mattered whether you’ve worked or not, we say as a general rule the income earning of the partner who goes out to work is the equivalent of what the partner who stays home looks after the house and children.”

What does matter, in terms of the multi-million dollar cases outlined in the table, and in Justice Peter Murphy’s arguments is the entrepreneurial skills of the husband.

“Usually luck is something that doesn’t attract that appellation [of entrepreneurial skills], something that’s the result of intelligence and an unusual set of skills leading to a result in terms of the asset created that is beyond the norm,” Michael Paul said.

Going back to basics the legislation outlines a four step approach, including creating a balance sheet of all the assets and liabilities, evaluating both direct and indirect contributions of both parties, and making adjustments in favour of the weaker financial party.

Adjustments include if a person is caring for children, has a smaller income earning capacity or if one party has more property.

But Justice Peter Murphy looked at what are called “special contributions”, and in the case of the rich “entrepreneurial type contributions have been rewarded”, Michael Paul said.

“No one necessarily has a greater role.

“You’ve got to allow special contributions because to not do so you would be really ignoring something.”

Paul explained that what does happen in a lot of cases is that a judge will find that the contributions have been equal.

“That is the case absent either somebody starting with a lot more in assets then the other or somebody inheriting along the way,” he said.

“If you start with a lot of assets and it’s a short marriage you probably keep them.

“If it’s a long marriage after ten years or so there’s frequently little regard had for what you started with.

“Although there are exceptions to that for example if the asset is still in the same shape, is it a house, a business, the court should give a bit more to the one that brought it in.

“That’s one of the hardest things to work out.”

The other source of wealth some divorces squabble over is inheritance.

“People are always concerned about inheritances being gobbled up by the other party but it doesn’t happen that way because the court almost quarantines the inheritance if it was recently received on the side of the person who received it, it’s got to be more than five or six years ago I think before an inheritance starts to get divvied up,” Michael Paul said.

But it’s all considered on a case-by-case basis.

“Nobody is suggesting those cases [in the table] were wrongly decided, they’re all quoted as authorities for various propositions and I think an entrepreneur will still in an appropriate case, it’s almost back to the definition ‘what is special?’” Michael Paul said.