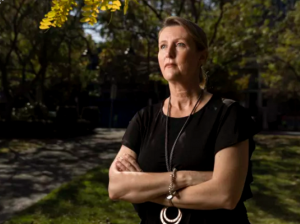 Kylie Parker and her intended husband will redraw their wills to protect their children from previous marriages.
Photo: Brook Mitchell

For chartered accountant Kylie Parker, who is about the embark on her third marriage, making sure there is a record of what is brought into the union is top-of-mind.

“We’ve both been through divorces, and we both know where we are at and we are hoping this takes us out to end of our lives,” says the 45-year-old Sydneysider.

She trusts her husband-to-be, who is also a trained accountant, also has two children and is tying the knot for the second time, but they are bringing significant assets in the marriage.

“We have started a spreadsheet listing the assets we are bringing into the marriage,” she says.

As they are in process of buying a house together, they will be taking out life insurance with each other as beneficiaries to cover the mortgage if the unthinkable should happen.

Kylie and her intended will redraw their wills to make sure their children are protected if either dies and the surviving partner enters into another relationship.

Kylie has written a book, Planning Plan B, which is a guide on how to deal with life’s most stressful events, of which divorce, as she can attest, is among the most stressful.

“It’s a practical guide to the big stressful events so that you can cope with the emotional side,” Kylie says.

A modern family relationship can be complex and if one of the partners was to die without a valid will, there’s good chance that your estate would not be divided up in the way you would have liked.

Experts say it is not only important for those, particularly those getting married for a second time, but also for those in de facto relationships, to make a will and estate plan that includes a power of attorney.

Emma Woolley, a lawyer and partner with Hall & Wilcox Private Clients, says it is hard enough for those with fairly straightforward affairs to contemplate their own death and to make plans, let alone for those who relationships are more complex.

However, there is much less likelihood of misunderstandings and disputes if you make those decisions at an early stage of the relationship so that if something happens, the respective children will be looked after, she says.

Emma Woolley recalls a case involving a terminally-ill man in a second relationship, with adult children from his first relationship.

Heads in the sand

“He had put his head in the sand and didn’t do anything in relation to his super and that resulted in a dispute between his children and his partner that ended-up costing both sides tens of thousands of dollars in legal fees,” Emma Woolley says.

“If he had taken the admittedly difficult step of trying to decide what to do about it, that could have been avoided,” she says.

Communication with family members about your intentions is key, Emma Woolley says. “You don’t have to talk numbers but you should be telling them what you are doing so that they know,” she says.

If you say what will happen when the person dies no one will be surprised about the contents of the will, she says.

It’s surprise plus grief that can lead to disputation and litigation, she says.

It is generally believed that there is no differences in law between married and de facto couples. And that’s right, up to a point.

For example, under the law, a de facto couple who lives together for at least two years has the same rights as married couples with respect to property settlements.

However, those in de facto relationships who don’t have a will and estate plan can be treated differently, says Anna Hacker, national manager of estate planning at Australian Unity Trustees.

If there was to be a dispute about the care of one of the partners in a de facto relationship, it is not automatic under the law that the partner is considered next-of-kin and able to make decisions for the incapacitated partner or, if the partner was to die, that the surviving partner is next-of-kin.

Anna Hacker says it could be that friends of the de facto couple could be asked to sign affidavits stating the two really are a couple.

However, marriage automatically establishes these rights, she says.

Keep up to date

Kevin Smith, a financial planner at Ipac South Australia, says it is important to keep wills up to date as circumstances change.

Marriage generally revokes wills automatically, unless made in contemplation of the marriage.

“I had a client who had retired and left his partner 10 years earlier,” he says.

“The client was diagnosed with a brain tumour and had complications because of this,” Smith says.

“When he re-read his will, he was leaving a multimillion-dollar estate to his ex-partner who he had nothing to do with for more than 10 years,” he says.

Smith says it is also important to document as much a possible. And that includes any gifts or loans to adult children.

That is not only to make it clear to your partner what money is going to your kids but to make it clear what is the basis upon which the money was given and what would happen is your child’s relationship was to end.

“If your son or daughter moves in with someone and then they separate you can make sure that the money is not part of any division of assets,” Smith says.

Timothy Morton, an associate director of family and estate lawyers Farrar Gesini Dunn, says as superannuation is not part of the estate, sometimes it can be overlooked.

The binding nominations of large funds lapse after three years.

However, some large super funds have recently introduced “non-lapsing” nominations, but there’s some doubt as to whether these would be legally binding on the super funds, Morton says.

Lawyers agree that binding financial agreements can be a good tool, particularly for those entering another relationship, where they are bringing assets in the relationship.

They can state what happens with the assets if the relationship ends.

They can be a good tool to give more clarity on where children from previous relationships stand. To be valid, each partner has to get independent legal advice.