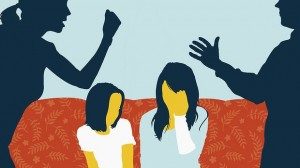 It’s a parenting tip echoed from one generation to the next: “Don’t fight in front of the kids.” But many parenting experts believe it’s not the actual fighting that upsets kids: it’s the way in which parents argue.   So how does inter-parental conflict affect children? Is it ever okay for parents to argue in front of the kids?

Warren Cann, CEO of Parenting Research Centre, says the impact of parental conflict on kids depends on the severity and frequency of the conflict, and the way it is resolved. “Severe parental conflict is very damaging to children,” he says. “Ongoing, high level conflict can lead to emotional and behavioural disorders in children and there is evidence that the effects can be long-lasting.”

The parents’ relationship creates the emotional climate for a home, explains Cann. “If that climate is stressed and hostile, then it can affect a child’s development.” It doesn’t have to be the loud fighting variety either, Cann points out. Even when there’s no arguing, unspoken hostility can cause distress.  “It can be those long periods of stony, frosty silence,” he explains, adding that if these periods become extended it can have a serious impact.

Whilst conflict is a part of any relationship, it increases when you become a parent. “Research shows that stress levels rise significantly after the birth of the baby,” says Cann. “Conflict increases with stress and stress increases with parenting – it’s how parents manage conflict that can either be helpful or harmful to kids.”

Is it ever okay to argue in front of kids?

There is research that shows that there can be advantages to children being exposed to parental disagreements, particularly when they get a chance to see their parents work through issues.

A recent Cardiff University study claims that there’s no need go out of earshot when having an argument with your partner. Rather, the psychologists at Cardiff University believe it’s good for children to be exposed to constructive arguments as it sets a good example for the children.

Psychologist and Director of Parent Wellbeing, Jodie Benveniste, agrees that it isn’t always a bad thing for children to be exposed to parental disagreements, particularly when they see their parents discussing issues respectfully. “There are ways to discuss issues which strengthen relationships rather than pull them apart.”

“Children can actually benefit from witnessing disagreements if parents listen to each other, and are willing to give and take,” says Benveniste. “It shows kids how to negotiate and find solutions to problems.”

In other words, it’s fine – even healthy – for kids to witness your arguments. But there are caveats. “If you’re shouting and name calling, that’s not setting a good example at all”. Parents need to be aware that their kids are watching, and feeling the emotion in the room, explains Benveniste.

Cann agrees, adding that low emotional arguing is not damaging for kids. “All couples argue from time to time and it’s inevitable this will happen in front of the kids,” he says. “Children tune into high emotion – that’s the harmful stuff.”

He suggests that any discussion that could lead to high emotion should take place away from the kids, adding that it can be particularly damaging if children witness arguments that are about them. “Always avoid arguments about the kids in front of them,” advises Cann.

How are children affected by parental conflict?

It’s not the occasional bickering that harms kids, says Cann. This is a normal part of life and children are robust enough to deal with it. “An environment of chronic friction and hostility is what harms kids the most.”

Interestingly, the effects of parental conflict do not appear to be experienced equally by all children. New research by the Economic and Social Research Council (ESRC) found that the impact of everyday parental conflict on children’s behaviour is driven by how the children understand the problems in the relationship as well as the nature of the conflict itself. Children were more likely to experience behaviour, such as depression, if they blamed themselves for the conflict, or emotional problems if they felt threatened.

Factors such as temperament and age also make a difference. Younger kids will often think that they have done something wrong, explains Cann. Older children will worry that their parents are going to break up. “Some children are very sensitive to toxic elements in their environments; some are more robust and more resilient.”

Some research suggests that gender plays a role in how kids respond to conflict. “Boys are more likely to act up or become more aggressive, whereas girls tend to internalise conflict more and become withdrawn,” explains Cann.

If you’ve fought with your partner in front of your children, don’t panic, urges Cann. “Don’t beat yourself up about it if it happens; there’s no benefit in guilt. The most important thing for a child is to see their parents really trying to work it out,” he says. “If that’s absent, that’s most worrying”. Benveniste agrees, adding that if there are ongoing issues, it’s a good idea to seek professional help.

Children don’t need to know the ins and outs of the issue, explains Cann. What they need most, he says, is reassurance. “Be clear with your children that they are not the cause of your disagreements and reassure them that you are working on a solution to the problem.“