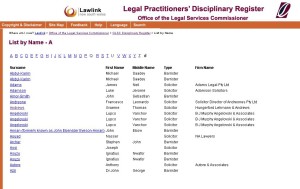 This week there was a flurry of activity at the Bureau de Spank.

This is the name informally nominated for the creaking disciplinary mechanism to which members of the legal profession are subjected.

More often than not it involves the application of wet lettuce leaves to the buttocks of those unlucky enough to have been caught.

It’s a squid-like apparatus with the Legal Services Commissioner, the Law Society and the Bar Association all waving disciplinary fronds at members of the profession.

The overriding feature is that at each stage of this ”independent” regulatory process lawyers are regulating their colleagues, whether it is the council or committees of the Law Society, the Bar Association or the Legal Services Commissioner, Steve Mark, himself, or the judges.

One job the law requires of Mark is that he keeps a disciplinary register of lawyers who have been birched for unsatisfactory or unprofessional conduct by the state’s Administrative Decisions Tribunal.

You wouldn’t think that was too hard a job; after all the decisions of the tribunal are public, and many of the cases are brought by Mark’s office, so he would have more than a passing acquaintance with the cases.

Registers for offenders have been a growing fashion. Sex offenders, paedophiles, perpetrators of domestic violence all have their names inscribed on these special rolls.

Naughty lawyers are not immune from register fever and their prior misdeeds are supposed to be online within the website of the Office of the Legal Services Commissioner, within the website of Lawlink, the online manifestation of the Department of Attorney-General and Justice. Good luck finding it.

Zealous citizens keep an eye on the naughty lawyers shame sheet, hoping to see listed someone from the legal caper with whom they’ve had a run-in.

So it came to pass that it was discovered that 16 names were missing from the register, some from disciplinary cases in 2006 and 2007 and then through 2009 to January this year.

Among those missing in action were the high-profile names of Robert Bryden and Bandeli Hagipantelis, from the big personal injury law shop, Brydens. They had been spanked and fined $48,000 each last year for breaches of the lawyers’ advertising regulations.

The odd thing was that proceedings against these two prominent Sydney lawyers were brought in the Administrative Decisions Tribunal by the Legal Services Commissioner himself.

Well, it was all a schemozzle.

Bryden and Hagipantelis had ”slipped through the cracks” and were straight away added to the register – only four months late.

”We must thank you for the notice,” although Mark thought the delay ”unlikely to have resulted in any damage to the public”.

A day or so later others from the missing 16 began to creep onto the register. Martin Piper, missing from the register for more than six years (failing to comply with undertakings to the Legal Services Commissioner), Anthony Margiotta, also appeared six years later (a caution for failure to comply with court orders), and Brett Hurley, an absence of nearly four years from the register (impersonating a solicitor acting for the other side), Ren Hai Jiang (unethical conduct), Peter Kaiser Simpson (delay in payment of disbursements), Paul Stokoe (obstructing investigators)

There were also three solicitors from decisions made last year whose names speedily appeared on the register this week after we inquired of Mark what was going on: Peter James Martin, Jinhi Kim and Trevor Butt. And there was solicitor Joseph Adam Johnson who was spanked in January this year for failure to assist in the investigation of complaints. Two other names remain unposted.

By now it was evident Mark’s ”cracks” were really chasms.

He tried to explain: ”As you would be aware, we administer the disciplinary register and when the disciplinary decision is made by the Law Society or Bar Association they supply us with information for placing on the register. We do not otherwise have this information.”

In fact, Mark was told in correspondence from October 2007 that the register was ”badly maintained”. It would not be too impossible a task simply to follow-up the public findings by the Administrative Decisions Tribunal with the bar and Law Society.

It’s easy to overstate things, but it does seem the regulatory arrangements for lawyers are not operating as seamlessly as they should.

Certainly, there’s the lingering belief that the Keddies fiasco was badly handled, to the detriment of the profession’s reputation.

The problem is the design of the system, whereby complaints about lawyers are batted between the Legal Services Commissioner, the Law Society and the bar. The commissioner sends some of the complaints to the professional bodies. If the customer is not satisfied with the outcome the commissioner can be asked to review the findings.

The solicitors’ and barristers’ trade unions insisted on having a co-regulatory role, arguing that to allow an ”independent” body to look at disciplinary matters would threaten lawyers’ independence.

The government swallowed the reasoning, spurious as it was. It means the Law Society, the Bar Association and the Office of the Legal Services Commissioner share in the dwindling kitty that funds the regulatory system, the Public Purpose Fund, which is the income earned on the balances of clients’ money held in solicitors’ trust accounts.

You could say that clients are paying for the privilege of having their complaints about lawyers’ conduct handled by associations whose job it is to protect the interests of solicitors and barristers.

The Legal Services Commissioner has to limp along on a budget of just over $4 million, regulating more than 25,000 lawyers in the state.

The solicitors’ and barristers’ unions should surrender their regulatory functions and associated funding so they can concentrate on nice things like parties and PR.

It would save them the discomfort of the straddle on the barb wire fence.