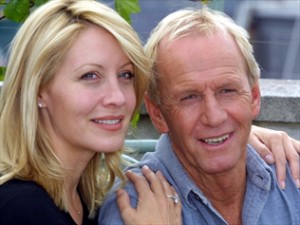 Hogan is keeping the rights to his iconic Crocodile Dundee character and the film company that produced the films, as well as ownership of their home in Venice Beach, California.

Linda Kozlowski will reportedly be able to remain living in the house for another four years, or until she remarries, whichever happens first. She also has the option to buy the house outright at the original purchase price of $US1.59 million.

The couple will reportedly have joint custody of their 15-year-old son Chance, and neither will pay child or spousal support.

It is unknown if Paul Hogan and Linda Kozlowski had entered into a pre-nuptial agreement prior to getting married,

Hogan cast Kozlowski as his love interest in 1986’s Crocodile Dundee, where a romance blossomed and Hogan subsequently split with his first wife Noelene Edwards soon after.

Hogan, 74, and Kozlowski, 56, married in 1990 after the release of the film which made Hogan a global star.

Previously, Hogan had five children with ex-wife, Noelene, whom he divorced (for the second time) in 1986.

Paul married his first wife Noelene Edwards in 1958, the year that Linda was born, and divorced her for the first time in 1981. The couple had five children together.

They remarried just a year later but divorced for a second time in 1986, when it is alleged that the comedian started his relationship with Linda.

Hogan, it seems, hasn’t given up on love, even at his advanced age, recently stating that:

“The secret to love and women is — if you’re lucky, you get a good one, and they stick around.

“If you’re real lucky, they’ll stick around for a long time. If not, you move on. But,” Hogan smiled cheekily, “I haven’t given up.”

Prior to splitting with Kozlowski, Hogan was at the centre of a long running Australian Tax Office (ATO) investigation for tax evasion. After returning home to attend his mother’s funeral in 2010, he was prohibited from leaving the country, which resulted in a public stand-off with the taxation department. No charges were ever laid and he settled for an undisclosed sum in 2012.