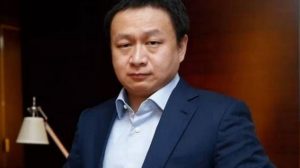 Divorce can take a toll. For the Chinese tycoon behind the gay dating app Grindr, that toll comes to $US1.14 billion ($1.51 billion).

Zhou Yahui, a Chinese internet mogul and billionaire, will have to transfer nearly 300 million shares of his company to his wife, Li Qiong, according to a statement from the company. The document does not say why, but China’s media is abuzz with articles saying the two are getting a divorce.

Chinese billionaire Zhou Yahui will have to transfer 300 million shares in his company to his wife.

That apparent split is the latest to show how divorces can have a significant impact on the commercial ventures of some of China’s wealthiest business leaders.

Zhou, 39, earned his fortune developing web and mobile games. In January, he made headlines when his company, Beijing Kunlun World Wide Technology Share Co, purchased a controlling stake in Grindr for $US93 million ($123m).
In a Monday ruling, the Haidian district court in Beijing awarded Li 70.5 million of Kunlun’s shares. Based on the most recent stock price, Li’s shares are worth about $US1.14 billion ($1.51bn). The huge equity transfer would make this one of the most expensive divorce settlements in China.

Neither Kunlun nor Grindr could be reached for comment Thursday, which is a holiday in China.

Resolving matters of the heart can be especially costly in China because many of China’s billionaires derive a significant chunk of their personal wealth from equity shares in businesses they control. When couples divorce, the division of marital assets has significant effects on their personal finances.

The well-publicised 2012 divorce of Wu Yajun, who founded Longfor Properties Co with her former husband, Cai Kui, is a notable case. Wu, once the richest woman in China, saw her wealth tumble by nearly $US3 billion ($4bn) after she transferred about 40 per cent of her shares in Longfor to her ex-husband.

Tudou, a Chinese video streaming service, had to delay its 2010 initial public offering after Yang Lei, the ex-wife of its chief executive officer, Gary Wang, filed a lawsuit against him. During the delay, Tudou’s competitor, Youku, raised $US203 million on the New York Stock Exchange, valuing the company at $US3.3 billion. Tudou eventually went public with a valuation of $US822 million.

By comparison, Zhou may be emerging from his former marriage somewhat better off. After the equity transfer, Zhou will still hold 388 million shares in Kunlun, retaining a majority 35 per cent stake in the company.