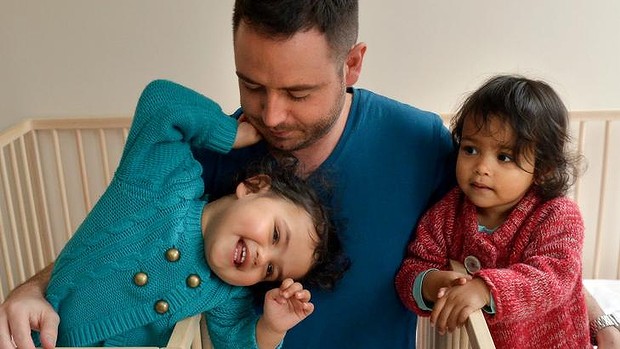 The commercial surrogacy laws in essentially all Australian states and territories have been criticised far and wide. Implemented to prevent the commercialisation and ultimately exploitation of people involved in the practice, all it seems to have achieved is drive people under-ground, and forced many Australians to seek overseas, that which they have been denied access to in Australia.

When Jake Docker discovered the NSW government was about to ban international commercial surrogacy in 2010, he immediately signed a contract with an agency in India to ensure he would be able to achieve his dream of fatherhood.

The father of twin daughters, Pippa and Millie, born to a surrogate in India in January last year, now questions why he rushed into it, saying hundreds of couples continue to skirt the law.

Since March 2011, NSW parents who engage in compensated surrogacy overseas have risked two years’ imprisonment and fines of $275,000, although those who signed contracts with agencies before that date are protected.

“I look back and think, ‘what was all that panic about?’ People are still doing it. Nobody has been prosecuted under that law,” he said.

“The laws banning commercial surrogacy are rubbish laws which haven’t had an effect on anybody.”

But Mr Docker, who is gay, is deeply worried that legal issues raised after baby Gammy might lead to a crackdown on overseas commercial surrogacy, which is only illegal in NSW, the ACT and Queensland.

“I am concerned there will be a federal legislation that bans international commercial surrogacy outright,” he said. “That’s punitive. It’s a real shame.”

The 28-year-old said further restrictions on surrogacy would create a black market for babies.

“Stamping out Australians doing commercial surrogacy anywhere in the world is not the answer,” he said. “It will only drive it underground, it will only marginalise people that are trying to access surrogacy. People who really want to have a baby will always find a way.”

He has nothing but praise for the Indian clinic which handled his surrogacy arrangement but he encountered problems with the Indian government when trying to take his babies home.

“I was put through the ringer by the [former] minister of home affairs in India,” he said. “I was interrogated by one of the senior officials there who told me I could be taking them to harvest their organs and all sorts of stuff.

“They do interrogate you and give you a hard time about taking the babies out of the country and that’s after you already have a birth certificate and an Australian passport for them.”

Mr Docker, who works in law enforcement, turned to surrogacy after exhausting other options in Australia, such as inter-country or local adoption.

‘‘I went on the adoption waiting list in NSW a couple of years ago and the response was: ‘When a child in need of adoption becomes available, we’ll get back to you’. I’ve never had an email and that was about four years ago,’’ he said. ‘‘I looked at inter-country adoption. If you say that you’re gay, don’t even bother.’’

Mr Docker, who moved from Sydney to Melbourne six weeks ago to find more family-friendly accommodation for his toddlers , still has 11 embryos in storage in India and hopes to have more children.

‘‘As a single parent, it’s only finances that are preventing me from having more, but I wouldn’t change my circumstances for the world. I love being a dad.’’