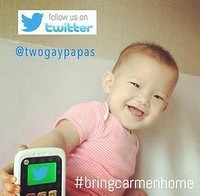 A couple is stranded in Thailand after their baby’s surrogate mother withdrew her permission for them to take the little girl home.

The surrogate, who is not biologically related to the baby, handed over newborn Carmen to American Gordon Lake and his Spanish husband Manuel Valero in January.

She then failed to show up at a meeting scheduled for her to sign paperwork allowing Carmen to leave Thailand with her fathers.

Lake and Valero say the woman, known only as Oy, refused to sign Carmen’s documentation after she realise the couple was gay.

“For the last six months, we have been stuck in Thailand, faced with the possibility of losing our jobs and our house back in the US because we cannot leave,” Lake wrote on a crowdfunding site they set up to assist with their legal fees.

“If we leave, we risk the greatest loss of all – our beautiful baby daughter, Carmen. All this because our surrogate doesn’t want Carmen to be raised by gay parents, and the law that should give me full parental powers excludes me from obtaining them because I am gay.”

Lake and Valero already have a two-year-old son named Alvaro, who was carried by an Indian surrogate.

“We chose Thailand for gestational surrogacy, where an egg donor is used. Our agency seemed reputable.

“They never warned us there could be any problem doing this as a gay couple. We certainly would have never started the process if we had known what we know now.

“The surrogate was friendly and willing to sign all documents, right up until Carmen was three days old and she met Manuel, my spouse.

“When she realised we aren’t an ‘ordinary’ family, in her words, she shut down the process allowing us to take Carmen home.”

The couple’s plight is made even more difficult due to a new Thai law banning foreigners from using local surrogates.

The new law was enacted in February and was prompted by a series of scandals surrounding Thailand’s surrogacy industry last year. 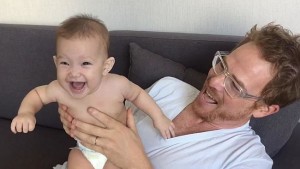 Firstly Australian baby Gammy, who has Down syndrome, was abandoned by his parents, who left him in Thailand when they returned home with his healthy twin sister.

Then, in a second controversy, nine babies fathered by a Japanese man using Thai surrogate mothers were discovered in a Bangkok apartment.

The couple’s surrogate was already pregnant with baby Carmen when those scandals broke.

The new law features a temporary provision allowing intended parents who had already begun the surrogacy process to claim parental rights over their babies, but as the provision uses the wording “husband and wife” it excludes gay parents.

“[The words ‘husband and wife’ close] the clear path to exiting the country that Carmen should be eligible for, because we are a gay couple,” Gordon wrote.

“We are good people who have gotten tangled up in a big problem. We only want to return home to our families with our daughter.”

When baby Carmen’s surrogate spoke to local television station Channel 3 she insisted she had no problem with the couple’s sexual orientation.

“But I’m worried about the baby, her future and that she might fall into the hands of human traffickers,” she said.

Meanwhile Lake told Channel 3 he and Valero wanted to solve the issue “peacefully”.

“She’s our daughter, we’ll be here as long as we need to be. We’re not leaving Thailand without our daughter,” he said.

“From the very beginning we’ve wanted to solve this peacefully. We want her to be involved in her life. We want to sit down and figure out how we solve this situation.