The number of citizenship requests for children born in India has risen by more than 300 per cent over the past five years, documents obtained under freedom of information show.

Surrogacy Australia founder Sam Everingham said Australians were fast becoming the highest per capita users of compensated, or commercial, surrogacy, despite laws in NSW and other states criminalising it, even if it occurs overseas.

“Australia, funnily enough, has become one of the largest surrogacy markets internationally because of the perfect storm created by the lack of access to international adoption, women leaving childbirth later on and the fact we are a wealthy country and women can afford it,” he said.

Mr Everingham estimated that about 100 NSW couples each year were engaging in compensated surrogacy overseas, and about 500 nationally.

Nationally, the Family Law Council is reviewing how best to deal with the legal issues posed by increasing use of surrogacy, with a report due in December.

Department of Immigration and Citizenship show that there were 519 applications for citizenship for children lodged in India in the 2011-12 financial year.

University of Technology, Sydney professor Jenni Millbank said figures she obtained from the Department of Immigration and Citizenship show that there were 519 applications for citizenship for children lodged in India in the 2011-12 financial year. This compared with only 126 in 2007-08.

She said it had ”never been easier” to pay for surrogacy overseas but its legal status meant many IVF doctors were refusing to give any advice to couples considering it.

“Patients are going in blind, with no information from their doctors about how many embryos to transfer and the risks of those sorts of things,” she said. “People don’t want to go to a poor country and behave harmfully but they work with the information they have.” 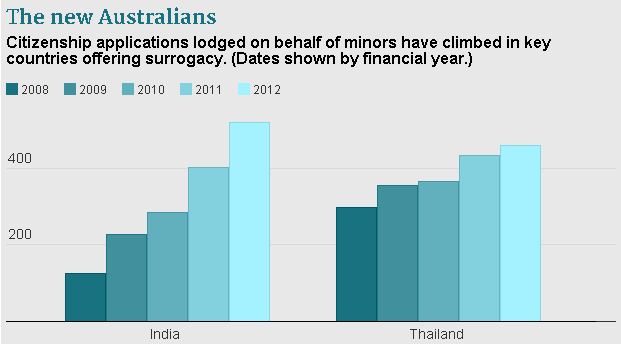 She said her discussions with Indian fertility providers indicated some had multiple pregnancy rates of between 25 and 40 per cent due to the common practice of transferring multiple embryos. Multiple transfers can put the mother and babies at risk, and in Australia IVF clinics have cracked down on the practice and have a multiple birth rate of only 8 per cent.

Professor Millbank said the steep rises in Australian children born in countries like India indicate more children are being born through compensated surrogacy, although the figures also include children who were not born through surrogacy but need to apply for citizenship overseas.

The rise is also evident in other countries commonly used for surrogacy, with Thailand increasing 54 per cent, from 297 to 459 applications, and Ukraine 122 per cent, from nine children to 20.

In a recent presentation at the Fertility Society of Australia conference, Professor Millbank argued that Australia should create an ethical framework for compensated surrogacy.

“That doesn’t mean a profit-driven system, or an incentive system, but one that doesn’t make it so hard to do it if people want to do it,” she said. “Parents say the idea that they would ask someone to do that for free is abhorrent.”