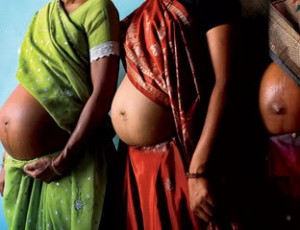 Australians paying women in India to have their babies are being overcharged by clinics taking advantage of the booming demand for commercial surrogacy, advocacy groups warn.

As a growing number of Australians travel to India to start a family, spending up to $80,000 and risking breaking the law, Surrogacy Australia said complaints about Indian clinics overcharging were growing.

”The villains in all this are the clinics making a fortune out of this. It’s very hard for a couple here in Australia to monitor what is going on over there. There have been some greedy operators in the market.”

Parents are increasingly complaining to Surrogacy Australia about being overcharged by as much as 40 per cent and billed for unnecessary medical procedures on surrogates, such as caesareans or hospitalisation for infections that could be treated with over-the-counter medications.

Commercial surrogacy is now a $2.5 billion industry in India, and it is estimated Australians make up at least 40 per cent of the clientele.

The number of Australian babies born in India has more than doubled from 170 in 2008 to 394 in 2011, according to the Department of Immigration and Citizenship.

India has emerged as Australia’s preferred surrogacy destination as it costs a third of the $US200,000 charged in the United States.

Yet, there are few protections for intended parents, as the Indian industry is unregulated, and it is illegal for people living in NSW, as well as the ACT and Queensland, to pay anyone anywhere in the world to have a baby for them.

However, with no sign of the demand for commercial surrogacy abating, and mounting concerns that parents and surrogates are being exploited, the NSW government is under pressure to rethink the ban on commercial surrogacy overseas. Surrogacy activists will push the case for decriminalisation at a private lunch for NSW parliamentarians next week. Research by Surrogacy Australia shows the ban deters just 7 per cent of parents considering surrogacy. The state ban is also undermined by the practice of the Australian High Commission, which will grant Australian citizenship to any babies born there via commercial surrogacy if DNA tests prove a genetic link to an Australian parent.

New Delhi-based lawyer Anurag Chawla, who has overseen more than 400 contracts between a surrogacy clinic and parents from around the world, said he refuses to do surrogacy contracts any more because the industry is being milked by unscrupulous businesses.

”It’s very unfortunate that there are few regulations in India and there are grey areas that people use to make a lot of money,” Mr Chawla said. ”Clients are just sh*t-scared of losing the baby if they object so they just want to pay and take the baby home, they are so desperate for a child.”

Australians are being advised to get multiple quotes and have an Australian lawyer look at a contract before they sign.

Dr Shivani Sachdev Gour, who runs the Surrogacy Centre India (SCI), which is popular with Australians, said the biggest risk prospective parents faced was spending more money than they planned, and not ending up with a child. ”You may end up spending more than you initially budgeted,” she said.

Three clients of Dr Shivani’s have said that all the potential costs they faced were clearly spelt out in SCI’s documents.

The NSW Labor MP, Linda Burney, was instrumental in the state parliament banning commercial surrogacy overseas in 2010, arguing it would ”prevent further growth in the overseas commercial surrogacy industry”. While the ban has failed to do this, Ms Burney said it should stay in place as children born via Indian surrogacy will never be able to find out who their birth mother was, and there was no way of ensuring the rights of the surrogate were protected.

The ban has to be reviewed late next year or early 2014. The NSW Attorney-General, Greg Smith, said that while he sympathised with people who want a family, the ban is ”justified by the need to avoid devaluing human life and dignity, to avoid the exploitation of women, and by the interests of children”.

But surrogacy law experts argue the state ban ignores the reality of the burgeoning commercial surrogacy market, and simply forces people underground and exposes them to more risks.

The federal Attorney-General, Nicola Roxon, has asked the Family Law Council to investigate how the Family Law Act could be amended to reflect the growth in children born via surrogacy overseas, reporting back in December 2013.