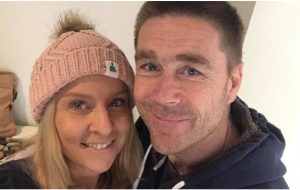 It’s been almost four months since Christine Thornton lay beside her husband and whispered into his ear as he died in a Swiss euthanasia clinic.

It was a good death, the kind the couple had so desperately wanted. Peaceful. Dignified. Full of love.

Christine, who has shared her story to coincide with the start of Victoria’s assisted dying laws today, knew that Troy would still be able to hear her for about two minutes after the drugs began flooding his body.

“To me, that was peace of mind and I just made sure I said everything I could possibly think of to say,” the Victorian office manager and mother-of-two told AAP this week.

“I told him how much I loved him, and how I would make sure the kids would never forget him, that they would know how special they were to him.”

Staff had been asked to gently touch Christie on the head when they were certain Troy was gone but when that moment arrived, she knew instinctively.

“You can feel the difference. I felt it. He was no longer there. It was the shell.”

Soon afterwards, Christine was on a plane with Troy’s ashes, bound for their home state of Victoria and a sad reunion with their children Jack, 17 and Laura, 14.

Months down the track, Christine is frank about the aftermath of euthanasia and says it’s perhaps not what some might imagine.

She says there’s been no second guessing Troy’s decision to die. But there has been a profound sense of comfort in the end of his suffering and the good nature of his death.

“I’m not questioning myself about whether it was the right thing. I know exactly how he was feeling,” Christine said.

“He was scared of what was coming (from his disease), and it was coming over the hill very quickly.

“I’m at peace that I was able to fulfil Troy’s wishes. We had so many conversations about it, over so long. His whole thing was having the right to chose a good death over a bad one. To have dignity. He got that.”

Troy, a veteran Victorian firefighter, was just 54 when he opted to die quickly, by lethal injection, rather than slowly from multiple system atrophy, an incurable and untreatable disease.

If the disease is allowed to run its course, sufferers are reduced to a vegetative state, and can often die choking on their own mucous as crucial functions like swallowing become impossible.

Christine says she and her children are grateful that Troy was able to avoid a death like that.

“They are doing okay. Again, I think it’s the peace that comes with knowing their dad’s not suffering anymore.

“We had so many conversations leading up to this, we had family holidays, we spent so much time together and we were very open – always talking about it, checking in with each other to make sure we were all okay.”

Troy’s decision to die was driven by fear about the end stages of his disease. But Christine says it was also about his role as family protector.

“The kids, they’ve seen and experienced things that kids shouldn’t have to,” she said.

In the days before they flew to Switzerland, Troy choked to the point of unconsciousness, with his family around him.

“He stopped breathing for two minutes. He was worried that if that had happened when we were not home, we could have found him choked to death,” Christine said.

“He just said I know I’m doing the right thing. I can’t be found like this.”

Christine says Troy would be happy that Victoria has become the first jurisdiction in Australia to allow euthanasia in more than two decades.

The laws were too narrow to help him, because he could not find two doctors who would say with certainty that his degenerative disease would kill him within 12 months.

But Christine is adamant that the Victorian legislation must be the start, and not the end, of a public conversation about the lack of end-of-life choices in Australia.

“Troy never thought the first laws would help everyone, but it’s a start,” she said.

As of today, terminally-ill Victorians can now legally ask their doctor for lethal drugs to take their own lives under the nation’s only euthanasia laws.

The state’s voluntary assisted dying scheme is expected to be used by about 150 people annually.

Under the scheme, terminally-ill Victorian adults in intolerable pain and with less than six months to live, or 12 months for neurodegenerative diseases, and who meet 68 safeguards can request their doctor’s help in dying.

But while the laws are now in action, even if someone starts the process today it will take at least 10 days to be completed.

It’s been 18 months since the Victorian parliament narrowly passed the laws during marathon sittings in 2017.

Since then a taskforce has been in charge of establishing how the system will work.

An independent review board and the coroner will keep track and monitor all deaths under the scheme.

While the laws have a large amount of support, critics remain, and on Tuesday evening about 50 pro-life activists, including children, took their protest to steps of Parliament House for a candlelit vigil.

The Government anticipates up to 150 people a year will use the scheme.

The laws have been highly divisive.

A woman whose terminally ill husband lobbied hard for assisted dying to be legalised in Victoria is among those “over the moon” the controversial laws have come into effect.

The Melbourne man had campaigned hard for the laws.

“I’m over the moon, and it makes me sad to think that Pete is not around to see it, but for everybody else, it’s a great step forward,” his wife Elizabeth Short told 3AW radio.

Mrs Short said Peter was given Nembutal, known as the “peaceful pill”, but in the end chose palliation in hospital.

“He had the choice to end his own life or to choose the route he ended up doing, but it was the greatest gift anybody could have given for him,” she said.

She added people needed to understand terminal sedation already “happens all the time without regulation”.

Go Gentle director Andrew Denton said by putting in place safe and workable assisted dying laws, Victoria had done what no other Australian state was willing to.

“The Victorian voluntary assisted dying law has set the benchmark for how public policy should be designed and implemented in this country,” he said.

“The question now is not if but when other states will follow Victoria’s compassionate lead.”

Catholic bishops issued a last-ditch warning against the contentious laws, with a letter signed by four Victorian bishops warning of a “new and deeply troubling chapter of healthcare”.

“We cannot co-operate with the facilitation of suicide even when it seems motivated by empathy or kindness,” the letter signed by the Melbourne, Ballarat, Sale and Sandhurst bishops said.

Just hours before the new laws came into effect, about 50 protesters with Pro-Life Victoria took to the steps of Victoria’s Parliament House, objecting to the scheme.

“This legislation is coming into effect despite widespread opposition within the medical community,” Pro-life Victoria president Denise Cameron, a former nurse, said.

• Adults with a progressive, advanced terminal illness and less than six months to live or within 12 months for neurodegenerative diseases

• Suffering must be deemed “intolerable”

• They must be of sound mind

HOW WILL IT WORK?

• Patients must initiate discussion of assisted dying and no one else

• They will be assessed by two experienced doctors, including at least one specialist

• Those approved will be granted permits for lethal medications, which must be self-administered

• Doctors do not have to be present when patients administer medication

• Unused lethal medication must be returned within 15 days of death

• The Department of Health and Human Services will approve applications

• An independent review board will oversee each step of the process

• The coroner must be notified of assisted dying deaths

• If someone breaches the self-administration permit, they face potential life imprisonment