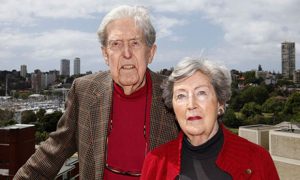 They keep it hidden, but close by. Two jars of Nembutal. One for him and one for her. When, and if, the time comes, they say they’ll swallow what some call the “peaceful pill”, drift off to sleep and die within an hour. Possession of the lethal drug is illegal; an ironic twist given that one of them is the former attorney general of Australia.

Kep Enderby sits with his wife Dot in a Sydney living room overlooking the sea. He fiddles with his walking stick and looks up. “I’ve thought about it a lot,” he says. “I’m suffering a lot. I’m not as active as I used to be – you can see this bloody stick. I’m a geriatric and I’m not enjoying life at all.”

“Euthanasia is a civil liberties issue,” Kep continues, “If I want to end my life, it’s my business.”

Does he not see the contradiction that a former first law officer of the crown, under the government of Gough Whitlam no less, is committing a criminal act?

Kep, 87, is fervent. “I think it’s a bad law, there’s no justification for it. But you’re quite right, we shouldn’t have it. That’s the truth of the matter. The law can often be unjust.”

He speaks for a while, drifting between case studies from his time as a supreme court judge in New South Wales which emphasise his libertarian point. Eventually Dot interjects.

A calmer voice: “The thing with Nembutal is, when you have access to it, you don’t sit down and make a plan … It’s something you have … something you know is there when you really need it.”

Procurement of the drug has been made more difficult in recent weeks since the closure of the black-market drug website Silk Road.

Dr Philip Nitschke, director of the euthanasia advocacy group Exit International – a group the Enderbys support – described the site’s closure as “devastating”. “Our elderly members appreciated the comfort that came from knowing that their transactions were private,” he said this month, warning: “The removal of the site will now mean that other less secure avenues will be pursued.”

The Enderbys won’t tell me where they got their two jars from.

Dot met Kep in 1960. He was a divorced 38-year-old law lecturer at the Australian National University in Canberra, drunk on the works of Marx and the anarcho-communist Peter Kropotkin. She was a 35-year-old college librarian raised in the traditions of the Labor party but without an active interest in politics.

Kep spotted Dot first. It was at morning tea in the common room.

“I confess all I saw in Dot at the beginning was a beautiful bloody woman,” he says. “I wanted to bed her.”

Dot laughs. “Well, I was otherwise taken at that stage,” she says. A courtship began, and within four years they were married. He moved into politics six years later. They celebrate their 50th wedding anniversary next year.

Dot and Kep concede they don’t know exactly how they’ll use the Nembutal. Perhaps, they say, it will be sipped simultaneously, then they will lie on the couch and drift off. But sometimes Kep has bad days and thinks about taking it alone.

“I’d get up out of bed in the night time, get the Nembutal from where I know it is, swallow it and Dot would find me on the couch or something.”

How would Dot feel to wake up and find him?

“Well it’s his right to do it if he wants to. If he feels he’s at that stage,” she says, unflinching.

The debate surrounding voluntary euthanasia has picked up once again in Australia. Only last week a legalisation bill narrowly failed in the Tasmanian parliament, voted down by 13-11. This despite polling suggesting 80% of people in the state supported it. In recent years state parliaments in New South Wales and Western Australia have rejected similar legislation, and at present it remains illegal throughout the country.

Kep describes a deep fear of going “demented”. He sees Whitlam every now and again; the last visit was four months ago. “I’m not even sure he recognises me,” Kep says.

It’s a far cry from their first encounter. Kep comes alive as he describes it; he was elected as the Labor member for Canberra in a 1970 byelection. “Whitlam was making a name for himself then, a great name, you couldn’t help but be hypnotised.”

After the 1972 election Enderby was fast-tracked to cabinet. In February 1975 Lionel Murphy moved to the high court, vacating the AG position. Kep says he knocked on Whitlam’s door, demanding the job he’d heard Whitlam was going to take for himself. “I said, ‘Oh come off it, I think I deserve it.’ He said, ‘All right, you bastard.’” Dot resigned her job at the library – such were the engagement demands of a senior cabinet minister’s wife at the time.

He pushed through progressive legislation – including the Family Law Act that introduced no-fault divorce. And then, on 11 November – Remembrance Day – the governor general, John Kerr, removed the prime minister, against attorney general Enderby’s advice.

Kep was representing Whitlam at a Remembrance Day event in Canberra. Kerr was at his side and Dot was in the audience. The event ended and Kep knew something was afoot.

“Kerr didn’t shake hands. He just left me, walked away. It was strange, I knew him quite well. He’d been in mine and Dorothy’s home for dinner. But Lady Kerr was terribly cold. She turned to me and said, “Goodbye, Mr Attorney.”’

Hours later the government was finished. Enderby was called to The Lodge by Whitlam. He recalls Gough opening the door, munching on a meat pie, and proclaiming, “The bastard’s done a Game on us” – a reference to the NSW premier Jack Lang’s overthrow in 1932 by governor Game.

Kep lost his seat at the following election. The radical reform of the Whitlam years was over, and the Enderbys moved to Sydney.

After his appointment as a justice in the NSW supreme court, Kep held other positions, including heading the Voluntary Euthanasia Society of NSW for six years. Dot retired from formal work shortly after the move but she says their relationship has “always been a partnership”.

You get the feeling that it’s the threat of this partnership breaking down, rather than a blinded commitment to political libertarianism, which really explains their decision to euthanise eventually.

He has arthritis and peripheral neuropathy. The doctors tell him it will only get worse. He doesn’t want her to hear, but says it anyway: “In recent times I have become more and more demanding of having Dot do things for me. I can’t even put these trousers on sometimes.

“I had this bout of diarrhoea, which lasted about four weeks. I couldn’t run to the toilet fast enough. It was shitting all over the floor and Dot would have to clean it up. This sounds like finding an excuse … to commit suicide, but the longer I live, the more of a burden I am to Dot.”

She frowns dismissively. “It’s bearable at the moment,” she says, but later she tells me the pain in her back is so crippling that sometimes that she considers taking the Nembutal out of the blue too.

They fondly recall their time in Balmain, sailing yachts together; flying light aircraft; they learned Esperanto – the global auxiliary language that Kep says embodies his beliefs as an internationalist. The most painful loss for him, the one he keeps coming back to in our conversation, is the fact that he can only read for an hour a day now. “I’ve been a great reader … But now my eyes get sore.”

It has been a charmed, full life – foiled, to an extent, by old age.

The ethical discussion of voluntary euthanasia is not likely to cease in the foreseeable future. The Enderbys’ case brings up many questions. Could people not as empowered as this couple come to a decision about euthanasia rationally? Would the legal proliferation of drugs such as Nembutal allow those without terminal illness easier access to suicide? Too easy, perhaps?

Stella Young, a disability advocate and editor of the ABC’s disability discussion site Ramp Up, is concerned that framing the euthanasia debate around issues of individual liberty undervalues the lives of those with disability and illness.

“As a disabled person, I’m concerned about giving even greater control of our lives to the medical profession,” she says. “The way we view disability as a society has a lot to do with the deficit approach taken by doctors.

“No matter how hard we dispute it, our lives are seen as less valuable than the lives of non-disabled people.

“I don’t want to see a situation where already vulnerable people who are living without the supports they need feel pressure to solve this problem by requesting death.”

As I leave I ask Dot what she’d do if Kep went first. They’re obviously still deeply in love, surely she’d be heartbroken?

“I’d cope. I did for the first 30 years of my life.” It’s a rational, lucid response based on mutual respect and understanding. It might also be seen as compelling argument.