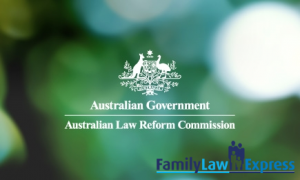 Law reform is a process by which the laws, such as family laws, are modernized and shaped over time to better reflect the important social values of the modern society.

Law reform improves access to justice, eliminate defects in the laws and suggest effective methods for administering the law and dispensing justice. 1 There are a few major agencies that influence on reforming the law, these are the Law Reform Commissions, the Parliament and its Committees, the media, and the non-government organisations.

These agencies of reform were also created to ensure independence of governments, political parties, and lobby groups; to ensure high quality of research of the development of well respected bodies, and; build up specific expertise and authority in the society.

The ALRC also ensures that Australian law still favourably compares to international law standards, such as the International Covenant on Civil and Political Rights in which Australia is a signatory. They also ensure that no proposals or recommendations made unduly trespasses on personal rights and liberties of citizens, or make those rights and liberties unduly dependent on administrative, rather than judicial decisions. They also take into consideration when making any recommendations the cost of access to and dispensing of justice.3

The ALRC’s report “For the Sake of Kids: Complex Contact Cases and the Family Court 1995” was a vital reason for the 1995 amendment of the Family Law Act 1975. This is called the Family Law Reform Act 1995 (CTH). Both parents were given responsibility for the care and control of their children involving provisions such as education, discipline and medical treatment, this was seen as effective to both parents. These provisions were made clear in the cases of Capodici v Capodici, In the Marriage of McEarney and In the Marriage of Chandler.

In October 2010, the ALRC and NSWLRC completed an inquiry into Family Law and Family Violence. The report highlighted the need to enhance collaboration between the Commonwealth family law system and the state and territory child protection systems. It further added recommendations to the existing law and expanding the evidence base that is used to examine the problems alleging family violence and child abuse. 5 Both Commonwealth and State Law Reform Commissions are seeking to better change existing laws in order to reflect the modern society.

The Parliament or the lawmaking body of the Australian legal system has the legislative function to amend existing laws. The Parliament reforms the law by passing legislation, called statute laws. It seeks to reform the laws in order to better reflect the policies of the Government.

The Parliament has solidified the 1995 Family Reforms by introducing a rebuttable presumption of equal shared parenting in the Family Law Amendment (Shared Parental Responsibility) Act 2006 (CTH). This was referred to as “the most significant family law change” in 30 years by Attorney-General Philip Ruddock’s media release.6

The courts, on the other hand, interpret the laws made by the Parliament and through judicial decisions the Courts can shape the law and reform it. Under the common law rule, judges can reform the law by setting precedent decisions that can be applied to subsequent cases of similar issues.

However, most cases are already bound by set laws, which inhibit judges to make laws. The Courts in the case of Korban v Korban applied the 2006 Reforms. 7

The Family Court of Australia also publicizes media releases to update the public in relation to any family law matters. In 2004 Chief Justice Bryant welcomed the Government’s proposed changes to the Family Law 8 such is a mechanism for law reformation.

The House of Representatives is one of the houses of Australia’s Commonwealth Parliament with the role of determining the government, debates and passes laws, watches over government administration and expenditure, and provides forum for public debate on issues of national importance9 thus, an agency of law reformation.

In 2003, the House Standing Committee Family and Community Affairs produced a report inquiring into child custody arrangements in the event of family separation. This report was entitled as “Every Picture Tells a Story: Inquiry into child custody arrangement in the event of family separation.” The government responded in the affirmative through the changes submitted by the House and agreed for a new approach to the family law system that is needed, allocating $397.2million over four years in the 2005-2006 Budget.10

There are a number of statutory bodies that can advise and inform the parliament of areas that require law reform. They include the Family Law Council (a Federal body).

In 2004 the FLC released an initial Discussion Paper in accordance with the uncertainty of the ‘best interests of the child’ principle. The FLC inquired about the function of the legislatives to amend the operation of the Evidence Act 1995 (CTH) in certain circumstances.11

The final letter was handed to the Attorney-General in 2006 emphasizing the apt processes to be considered in resolving the issue on when the ‘best interest’ principle applies and the need to amend the Family Law Act to express a single principle of application and enumerating the exceptions to such principle.12

The submission for changes to the application of the ‘best interest’ principle remains unchanged as this was not incorporated in the Family Law Amendment (Shared Parental Responsibility) Act 2006. The FLC also provided its advice to the Attorney-General on the impact of family violence on children and on parenting.13