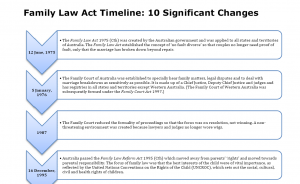 Family law is continually undergoing change. As the diversity of families increase, so does the law that protects it. In 1975, the Australian government created the Family Law Act1975 (Cth) (also shortened to ‘FLA’) in order to reflect the changing attitude of society. In the same year, the Family Court of Australia was introduced as a superior Australian federal court to hear family law matters, under Chapter 3 of the Australian Constitution.

The Family Law Act is comprised of 15 parts, dealing with areas such as divorce, parenting arrangements between separated parents (whether married or not), the protection and financial maintenance for children and property division for the parties involved. The primary aim for Family Law is to effectively address the needs of families experiencing crisis and hardship, whilst protecting the rights of children. It is important to remember that the Family Law Act has been subject to numerous changes and controversial amendments since its introduction in 1975. These changes are a reflection of two factors: political climate and the public frustration with the existing law

Amendments to the Family Law Act

In 1975, the Family Law Act changed divorce law in Australia when it established the concept of ‘no fault divorce’, which meant that the Court did not require proof that one partner had done something wrong, or why the marriage ended. The only ground for divorce is that there has been an irreconcilable break down of marriage: that is, that the relationship has permanently broken down. Another significant change for the act was the reduction of time for a divorce to take effect from three months to one month. As a result, in 1976 there were a large number of divorces recorded. The rate of divorce continued to increase steadily since the 1980s, whilst the number of de facto couples continues to increase as the number of marriages decrease, according to the Australian Bureau of Statistics.

The Family Court of Australia

The creation of the Family Court of Australia under the Family Law Act increased the response to problems surrounding marriage and its dissolution, children matters and property disputes. The Family Court is the forum in which majority of Australians litigate. However, there are many criticisms towards the Court, however, major developments have been made to improve the way the law addresses the needs of families in crisis, such as offering alternate dispute resolutions. As a result, the Court aims to provide cost-effective resolutions for families to reach agreements that are in the best interests of all parties involved, especially for children as per Section 4 of the Family Law Act 1975 (Cth).

In 1983, the Family Law (Amendment) Act 1983 (Cth) tried to clarify the concepts of ‘custody’ and ‘guardianship’ of children in an attempt to reduce the formality and adversarial nature of family law. As a result, in 1987, the court procedures were simplified removing the requirement for judges or barristers to wear the traditional wigs or gowns. The effect of this was to lessen the need to “win” a family law case and to create a non-threatening environment. Family law deals with sensitive issues that occur at the peak of crisis within Australian families, and it is the responsibility of the legal system to provide for an effective means of dispute resolution.

United Nations Convention on the Rights of the Child

Australia continued to shift its focus on protecting society’s most vulnerable members: children. In 1990, Australia became signatory to the United Nations Convention on the Rights of the Child, (known as UNCROC) which lead to the Family Law Reform Act 1995 (Cth). The effect of the legislation was to move away from the parent’s “rights” and towards the parent’s “responsibility” and “duty of care” for children. Furthermore, changes were made to increase children’s rights and protection from violence within families and the impact of a child’s continue contact with a violent ex-spouse: that is, the Family Law Act was amended to specifically include the terms “the best interests of the child”.

Move towards Mediation and Dispute Resolution

In 1996, there was a clear shift away from litigation towards mediation and primary dispute resolution (PDR). The Family Court presented new, simplified procedures that enable divorcing couples to bypass lengthy and expensive court trials. The main advantages of PDR are that the best decision is often reached as both parties agreed to it, as well as a reduced psychological and emotional effect. The introduction of “shared parental responsibility” recognised the desire for a continued joint duty and co-operation in parenting after separation or divorce.

The law aims to treat all people equally, irrespective of gender, age, race, ethnicity, religious convictions and social status. Before the 2006 amendments to the Family Law Act, it was noted that the role and status of parents was unfairly and inaccurately represented by terms such as ‘the residence parent’ and ‘the contact parent.’ The terms ‘residence’ and contact’ have now been removed from the Act and although orders can still refer to a person with whom a child can reside, there are no labels for parents. The emphasis now is on the definition of patterns and types of time that a child will spend with each parent.

The area where justice is not adequately provided for individuals also impacts the effect of Family Law on society. In the early 2000’s there was a call to review the access to services by reducing delays and increasing voluntary counselling for families. In 2004, a less adversarial model was trial in the Family Courts of Sydney and Parramatta, with the Melbourne registry following in late 2005. It is from the success of these trials that the program is now run in all family law registries.

In 2006, Family Relationship Centres were opened and compulsory mediation introduced: couples are now required to attend mediation before apply to the court for an order regarding children. Previously, the Family Law Act was limited to matters of children born or adopted into a marriage. It was not until 2006 that the Commonwealth was able to handle matters relating to ex-nuptial children under Chapter VII of the Family Law Act. There have been many reforms to address the gap between married and de facto couples under Section 51(xxxviii) of the Australian Constitution.

Furthermore, in 2006 there was a greater examination of issues involving family violence, child abuse or neglect. This progression towards the protection of dependent children is best illustrated by the presumption that both parents have a responsibility their children – although this was not necessarily equal parenting time under the Family Law Amendment (Shared Parental Responsibility) Act 2006 (Cth).

As a result, the reform broke the tension between living arrangements and moved towards an equal sharing of duties concerning the welfare and development of children under Section 60B(2)(c) of the Family Law Act 1975 (Cth).

De Facto Marriages Under One Law

In the past, de facto relationships were hardly recognised as marriage was the popular institution. As a result, couples within these relationships, particularly those with children, often struggled with their rights, especially concerning financial and property settlements in the event of a break up. In response to this increase, The Family Law Amendment (De Facto Matters and Other Measures) Act 2008 (Cth) was introduced to bridge the gap between married couple’s rights and de facto couple’s rights by easing the need to go to trial for property division. In the following year, e-filing for divorce on the internet was made available. This indicates that filing for divorce online increases accessibility due to the increase in processing speed.

In 2011, the government sought to improve the response to family abuse by broadening the definition of “violence” to state that it is not limited physical violence, under theFamily Law Legislation Amendment (Family Violence and Other Measures) Act 2011 (Cth).

For example, the definition now includes “serious psychological harm” and “serious neglect under Section 4B of the Family Law Act. By 2012, it is clear that the primary aim of the law is to put the safety of children front and centre of family law matters, without compromising a child’s right to a meaningful relationship with both where parents where this is safe. The increase of accessibility to the justice system is best illustrated by the availability of forms online, including applications for divorce, Notice for Child Abuse, Family Violence and the provision of information from a family counsellor or dispute resolution practitioner. 1

It is clear that the Family Law Act has evolved since its creation in 1975. This can be explained by the constant change and wide variety of family structures. No family is the same and no family is perfect. There will always be a difficulty to provide a single concept of law and apply it universally. However, there has been a gradual movement towards equality for all family units, regardless of its composition. The ultimate concern for law is the protection of children as the most vulnerable members of society – it does not matter what type of family the child comes from. The advancements in technology and social norms have historically given rise to law reform. The ability for Family Law reformers is to adapt to becoming a more crucial aspect of the legal system, and family issues are at the forefront of this challenge.

Online Legal Information Author at Family Law Express
Clare Decena is currently in her penultimate year of a combined Law and Media degree at Macquarie University, with a specialisation in discrimination law. Clare also has a passion for journalism and has been published in the Young Writer’s Showcase. Clare hopes to use her law degree to advocate the protection of children’s rights within family law.