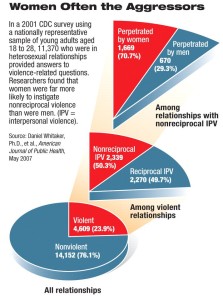 Contrary to the overwhelming perception in society, numerous studies and statistics recently published from a variety of disparate sources have indicated that women are more likely to be verbally and physically aggressive to their partners than men, and are increasingly participating in serious acts of violence against other men, women, the elderly and children.

The findings were presented to a symposium on “intimate partner violence” (IPV) at the British Psychological Society’s Division of Forensic Psychology annual conference in Glasgow.

Women were also shown to engage in greater levels of controlling behavior, which is understood to be a predictor of physical aggression in both sexes.

“This was an interesting finding,” Dr Bates says. “Previous studies have sought to explain male violence towards women as rising from patriarchal values, which motivate men to seek to control women’s behaviour, using violence if necessary.

“This study found that women demonstrated a desire to control their partners and were more likely to use physical aggression than men.

“It wasn’t just pushing and shoving,” Dr Bates said, of responses to the anonymous questionnaire. “Some people were circling the boxes for things like beating up, kicking, and threatening to use a weapon.

“The feminist movement made violence towards women something we talk about. Now there is more support for men and more of them are coming forward.”

In another finding in Australia, the number of men who report experiencing domestic violence from their current partner has almost doubled since 2005, according to a new survey released last week by the Australian Bureau of Statistics (ABS).

The ABS Personal Safety Survey 2012 collected information from men and women aged 18 years and over about their experience of violence since the age of 15.

Meanwhile, girls have been found to be more devious than boys in their torment of classmates, Australia’s biggest childhood study reveals.

Kids who are poor, overweight, Aboriginal, disabled or living with a single mother are most likely to be picked on in the playground, the Australian Institute of Family Studies has found in a survey of more than 4000 children aged 10 and 11.

Three in every five kids had been subjected to “unfriendly behaviour” in the past year, ranging from hitting to name-calling and being left out of social groups.

And according to new national crime figures women are now outpacing men in the violence stakes, with the rate of women committing assaults jumping 49 per cent since the mid 1990s.

Australian Institute of Criminology data shows the number of female assaults per 100,000 women increased from 125 to 186 between 1996 and 2010 compared to an increase of just 18 per cent for men, while other figures show that mother’s were by far the single biggest group responsible for child abuse and child murder in Australia.

Griffith University’s Violence Research and Prevention Program director Professor Paul Mazerolle said there was “no question” young women were getting more involved in violence: “There’s been a moderate increase in [female] violence but we as a community are less tolerant of violence so we’re seeing more of a response from police.”