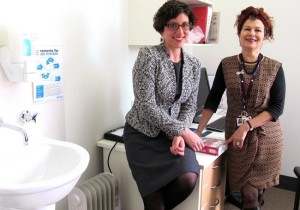 Solicitors who specialise in helping female victims of Domestic Violence have been providing free, clandestine legal support to suspected victims of family violence, in hospital settings, while they have been receiving treatment for suspicious injuries.

Lawyers working within the Royal Women’s Hospital are giving abused women discreet legal advice in an initiative that could be extended to other health centres.

The move has put doctors and the legal fraternity in partnership in the latest effort to counter Victoria’s high incidence of family violence.

It is giving women who might otherwise be too fearful to come forward access to free advice under the cloak of routine medical appointments.

Lawyer Linda Gyorki, who manages the project, said it was often difficult for women suffering chronic abuse “to go out and seek legal assistance and work out what their entitlements are”.

“Women experiencing violence might be so controlled by their partners they do not have the liberty even to Google a local legal service let alone plan a visit,” she added.

Often, such women found themselves only able to leave the house alone for antenatal appointments.

The project hopes to take advantage of that “window of opportunity” to inform the women of their legal rights, according to Dr Fleur Llewelyn, who heads the clinical side of the operation on behalf of the hospital.

“The power of having this kind of alliance is that women who are not usually able to see a lawyer are able to see them when they are ‘legitimately’ onsite for a medical appointment.”

The project, titled Acting on the Warning Signs, is a joint initiative of the Women’s and Inner Melbourne Community Legal. It is the first of its kind in a major metropolitan hospital and is funded by the Legal Services Board Major Grant Program.

Launched without fanfare two years ago, the preliminary findings of an expert panel that is overseeing the project suggest it is making a difference.

The service has so far provided advice to more than 100 women, with many having had follow-up consultations.

Underpinning the strategy is research that shows that putting women into contact with lawyers can help lead to a decline in violence. Also, according to research, abused women are more likely to disclose violence to health professionals than to lawyers.

Acting on the Warning Signs of Domestic Violence

A central aspect of the project was the opening of a free legal clinic within the social work wing of the Women’s. The clinic is open three times a week, allowing women to make contact of their own accord or via referrals from anyone working within the hospital.

Penelope Vye, the hospital’s manager of social work, said social workers had always worked in tandem with lawyers, but having one on-site had made the referral process more effective.

Women are able to see a lawyer without “fear for their lives”, Ms Vye said, and could make contact before returning home and losing their “sense of empowerment”.

“A woman might want to do something and she’s fired up, but when she goes home her self-esteem takes another blow and the opportunity is lost.”

Professor Kelsey Hegarty, who heads the evaluation team, said one of the key reasons for the project’s success was the convenient location of the legal clinic.

This was helpful not just for the women but also for doctors and nurses, added Professor Hegarty, who leads the abuse and violence research program at the University of Melbourne.

“It helped health professionals start to identify that there is a legal outreach clinic right there in the hospital and that it can help these women.”

Ms Gyorki said the legal service was generalist in nature, but she had found herself talking to women mostly about family law matters.

She said some women wanted to ask about the options for receiving child support payments should they leave a relationship. Others were seeking assistance filling out an application for an intervention order, while some with abusive partners from other countries had wanted to know how they could prevent their partners from moving their children overseas.

Ms Gyorki said that although leaving an abusive partner could be extremely difficult, bringing abused women into contact with a lawyer “means they can be provided with information which really arms them with options to be able to take that step of leaving”.

After women receive legal help they are referred back to social workers who can assist them in developing a “safety plan”, a guide to staying safe while leaving a violent relationship. They are also able to follow-up with further questions and pro bono legal advice.

“Some women just want to spend an hour with a lawyer, talk about their options and then consider what they’ve heard,” said Ms Gyorki. “But other times they might want to go to court or they might want ongoing case work assistance and we try to provide that when we can.”

The other major component of the project is a training program for doctors and health professionals that teaches them how to spot the physical and emotional warning signs of abuse and how to respond.

Statistics suggest that a full-time general practitioner could expect to see every week a woman who has been experiencing violence.

But according to Dr Llewelyn, who helped develop the training for medicos, doctors may not think to consider violence as part of the picture when they assessed patients or, even if they did suspect violence to be occurring, may not feel equipped to ask questions.

“Health professionals sometimes think talking to women about violence is not part of their role, but we know that violence against women is more of a health problem than many of the things we take for granted like cardiac disease. The training really anchors the fact that violence is a health issue.”

In fact, intimate partner violence is the leading preventable cause of death, disability and illness for Victorian women aged 15-44. In 2012-13, in Victoria alone, 45 homicides occurred in family settings.

Dr Llewelyn explained that there were many emotional and physical indicators that did not mean a woman was definitely experiencing violence but were warning signs that demanded a response.

For example, a patient could be accessing termination services repeatedly because she did not have control over her own contraception, or may be presenting to the emergency department multiple times with urinary tract infections or chronic abdominal pain.

To date, 135 staff at the Women’s had been trained to recognise signs.

The training had been given a big tick by the evaluation team, with health professionals more comfortable asking about family violence, according to Professor Hegarty, and “more confident in their skills to respond and refer, and more knowledgeable about legal options”.

Inspired by the US model of medical-legal partnerships

The project was inspired by the US model of medical-legal partnerships that has evolved over two decades and which is based on what is commonly referred to as the social model of health. It recognises that some illness is caused or exacerbated not by medical factors but by legal, social or economic ones, and can only be solved when doctors, lawyers and social workers collaborate.

The movement was founded when a Boston-based paediatrician, Barry Zuckerman, was treating repeatedly an asthmatic child who was living in mouldy accommodation. It was only when Dr Zuckerman enlisted the help of a lawyer to improve the child’s housing situation that he was able to fix the problem. There are now hundreds of examples of medical-legal partnerships throughout the US.

Professor Hegarty believes the Women’s-IMCL project could be developed further and expanded.

“You’ve got to get a large critical mass of staff trained and that needs to be recurrent and mandatory, the same as it would be in occupational health and safety,” she said.

Ms Gyorki’s team recently created a second clinic at the Royal Melbourne Hospital’s mental health outpatient facility and is looking ahead to see how the model could be introduced in other Victorian hospitals. A similar general advice service had also been introduced recently at the Alfred Hospital, which is partnering with law firm Maurice Blackburn.

As well as being funded through the Legal Services Board Major Grant Program, IMCL’s work in this area has received four years of funding from the Commonwealth Attorney General’s office, but that funding was cut in half in this year’s federal budget.

The final evaluation report on the Women’s project will be released next month.

Other Approaches to Tackling Domestic Violence

Other notable anti-domestic violence spokespeople have advocated for other approaches to tackling DV in the community..
One of the nation’s top judges has called for a separate, less ­formal tribunal to deal with family law cases involving extreme domestic violence, arguing that the current adversarial system is not the right place for women who have been badly abused. Federal Circuit Court chief judge John Pascoe said that he ­believed a new approach was also needed for cases involving serious mental illness.

While other DV advocates decry the decidedly discriminatory approach to domestic violence policies, whereby men as explicitly excluded from all forms of protection, while at the same time all literature seems to falsely imply that only men and insitigators of violence, while only women are victims of violence.

However, contrary to the overwhelming perception in society, numerous studies and statistics published from a variety of disparate sources have indicated that women are more likely to be verbally and physically aggressive to their partners than men, and are increasingly participating in serious acts of violence against other men, women, the elderly and children.

These recent findings were presented to a symposium on “intimate partner violence” (IPV) at the British Psychological Society’s Division of Forensic Psychology annual conference in Glasgow.

Whatever the gender composition may end up being, domestic violence is becoming a higher profile issue within Australia, and most experts agree that no one single solution would solve this insidious problem.

It would take a combination of strategies, hopefully made available to all peoples despite race, religion, sexual preference or gender, before we start seeing a reversal of this trend towards intimate partner violence as the increasingly relied upon strategy to address common day to day relationships disagreements.

Accessing justice: What the research shows

Legal professionals are only consulted for around 16% of legal problems; people often turn instead to their trusted health and welfare professionals for help on legal issues

Inequalities or differences that are “unnecessary, avoidable, unfair or unjust” are responsible for approx 17% of the total disease burden in Australia

In four out of five cases, people sourced their main adviser through personal resources or networks; while one-in-four people turned to trusted health and welfare advisers for help dealing with legal problems

A 2010 VicHealth report found intimate partner violence to be the leading preventable contributor to death, disability and illness for Victorian women aged between 15 and 44, ahead of other risk factors such as high blood pressure, smoking and obesity

Family violence significantly impacts pregnant women: between 4%-9% of pregnant women are abused during their pregnancy and/or after the birth

Interviews with survivors of partner abuse have shown that health professionals are the major group to whom women want to disclose violence.

A study shows that “a full-time primacy care clinician is probably seeing at least one currently abused woman each week, although she may not be presenting with obvious signs or symptoms”

The annual cost of domestic violence in Australia in 2002-03 was estimated to be $8.1 billion.