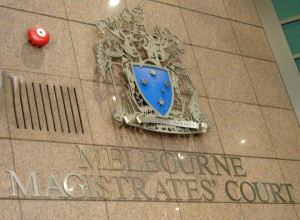 VIOLENCE in the home figures in one in seven of Victoria’s most serious crimes, as record levels of intervention orders are putting the court system under pressure.

The Magistrates Court of Victoria says the increase in applications for family violence intervention orders has become a significant concern for the court.

The Office of Public Prosecutions (OPP) says that of the 2719 criminal matters it handled in the year to November 2012, 378 related to family violence.

An earlier OPP report shows the number of family violence matters received by the office more than doubled between 2010/11 and 2011/12.

New figures from the coroner show 288 of the 545 homicides that occurred between 2000 and 2010 in Victoria involved family members or intimate partners.

An intimate relationship between partners was the common link in almost half of homicides, followed by parents killing children or children killing parents, the Victorian Systemic Review of Family Violence Deaths (VSRFVD) found.

The report by State Coroner Jennifer Coate found that of eight deaths where an intervention order had been involved, there were two suicides and one case where the parents of an affected family member were killed.

The number of orders has swelled by around 90 per cent over the past decade, becoming a significant concern for the courts, Chief Magistrate Ian Gray says.

Director of Public Prosecutions John Champion, SC, says the OPP’s policy of referring all family violence matters to social workers has strengthened its prosecutions since it was introduced a year ago.

Victims were now more willing to participate and performing better in the witness box because they felt supported, he said.

“Anecdotally, our workers believe that engaging with family violence victims earlier is resulting in fewer of them withdrawing their complaints as we can help them address any issues or concerns they may have, such as concerns over their safety,” Mr Champion said in a statement on Thursday.