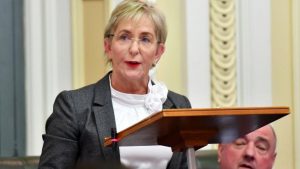 Recent outbursts by female Queensland MPs about domestic ­violence orders highlights a disturbing idea that men should just shut up.

The statements by the LNP’s Ros Bates and the ALP’s Shannon Fentiman were disturbing because of their gross generalisations and also because of their factual inaccuracy, which showed shameful ignorance and a disconnect from the real world.

They also highlighted a severe ­social imbalance that’s becoming more prevalent, because if a man said the same things about women, it would feature on every talk show and social media feed in the world.

Ms Bates unleashed a bile-laced ­tirade in response to a One Nation policy that would grant provisions for parents under domestic violence orders (DVO) to still see their children while the courts processed the matter.

This policy is designed to counter cases of untrue claims of domestic violence that are used to gain an unfair advantage in child custody hearings.

Bates said One Nation had been “brainwashed by a few jilted men caught up in custody battles”.

She was focusing on the relatively extreme rhetoric and actions of the Brotherhood of Fathers, but if she had bothered to take even the most cursory glance at ­online men’s help forums, Facebook pages and hard statistics, she’d realise that frivolous DVOs are far more than just “jilted men” whingeing.

According to the Australian ­Bureau of Statistics, about 26 per cent of DVOs issued in NSW were either withdrawn or successfully defended in 2015-16.

There is also this statement by ­retired Family Court judge Justice David Collier: “I’m satisfied that a number of people who have appeared before me have known that it (filing a frivolous DVO) is one of the ways of completely shutting husbands out of the child’s life. It’s a horrible weapon.’’

Then we have a survey of Queensland magistrates in 2015 that showed 74 per cent believed restraining ­orders were “often” used for tactical purposes. In NSW, this number soared to 90 per cent of magistrates.

A submission to the Australian Government in December 2016 by the Parents Beyond Breakup support group stated: “It is not uncommon that mothers who come to us for ­support will inform us that they were advised to make such claims in order to gain strategic advantage …”

“Once an order is issued, it can take six months to two or three years for a court to throw it out and in that time, fathers are prevented from seeing their kids,” he said.

The other major issue is fathers being pressured to make “consent without admissions” to false claims, something One Nation wants scrapped when children are involved.

“We speak to many men who say they have been advised by police and legal sources to sign these ‘consent without admissions’ forms because they won’t affect any court proceedings and will expedite the process. But it is detrimental,” said Mr Nicholls.

“The solution can be seen in some states in America and in the UK where police have to make an assessment of both parties before issuing ­orders, rather than applying a blanket approach.”

But rather than saying the law should assume all estranged fathers and husbands are violent, perhaps she would be better off dealing with the record 25,678 people who breached protection orders under her watch in the past year.

Domestic violence groups say proof is required for intervention ­orders to be issued but Augusto Zimmermann, a commissioner with the Law Reform Commission of Western Australia, wrote last year: “… data from the Western Australia Police ­indicates that domestic violence incidents … classified as ‘crime’ accounted for only 40 per cent of all domestic ­violence restraining orders in 2012.

“For instance, official illustrations on domestic violence now include such abstract considerations as ‘extreme jealousy’, ‘constant criticising’ and ‘ignoring the victim’s rights’.”

The biggest problem with the ­attack on One Nation is that Bates and Fentiman have basically shut down the debate.

According to them, we can’t even discuss the issue of fake intervention orders and anyone who does is just a jilted, angry loser.

The examples described above prove we do need to have the conversation and not be lectured to by nasty, ­virtue-signalling politicians.