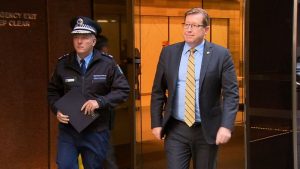 Asking partners and ex-partners for a character reference before a gun licence is issued is one of the gun reforms being considering in the wake of the shooting deaths of Sydney teenagers Jack Edwards and Jennifer Edwards last Thursday.

Other options on the table are to allow police to perform gun checks when courts, including the Family Court, deem children to be at risk and allowing GPs to raise the alarm when a patient has mental health issues.

Legislation that improves communication between the Family Court, gun clubs, doctors and police could be a way to help prevent deadly shooting attacks, the NSW police minister says.

The 68-year-old financial advisor legally bought the powerful handguns used in the killing months earlier while he was involved in a drawn-out custody battle with the children’s 38-year-old mother.

Mr Grant said his government won’t be making “policy on the run” but was open to revising gun laws, as is being advocated by the NSW opposition.

Improving communication between legal, firearm and other authorities was one option on the table, he said, noting that the Family Court of Australia offered a “big opportunity” for information sharing.

“Information flow is always among the most critical opportunities that are out there,” he said.

NSW Premier Gladys Berejiklian said the government doesn’t want a repeat of such a tragedy and will make changes if necessary – but without “overreach”.

“We want to make sure what we have in place is as strong as it can be and that nobody falls through the cracks,” she told reporters.

“I feel personally responsible to make sure we keep the community safe at all times and if there is something we should be tweaking or doing, we will do that.”

It’s believed the talks will consider whether police should conduct checks on firearms when court custody disputes are linked to a “notice of risk” to children.

In order to get a gun licence in NSW, a person must not have been subject to an apprehended violence order within the past 10 years.

Meanwhile, a petition by the Women’s Domestic Violence Court Advocacy Service NSW has called on the government to ensure women are consulted if their current or former partner applies for a gun.

“Women must be consulted before dangerous weapons are issued, especially where there is a history of domestic and family violence,” the organisation’s president Renata Field said in a statement.

“The NSW Police Firearms Registry has a lot of questions to answer, but this is being drowned-out by the police minister and the commissioner as they try and manipulate the message and scapegoat law-abiding shooters,” he said in a statement.