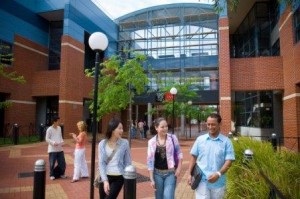 ALMOST 3000 employees have won the right to extra paid leave to help them deal with domestic violence, under a landmark deal between Victoria’s Swinburne University and the National Tertiary Education Union.

Under the deal, which the union said went further than previous agreements struck in the tertiary sector, any Swinburne employee experiencing domestic violence will have access to additional paid leave of five days a year. Previous deals struck with universities have not guaranteed extra paid leave.

The Swinburne deal allows extra leave beyond the five days to be granted by the university’s director of human resources, in consultation with the employee and their manager.

Swinburne vice-chancellor Linda Kristjanson said the university recognised the “significant adverse impact domestic violence has on those who experience it”.

“This is a significant issue for too many Australian women and men,” Professor Kristjanson said. “In reaching this agreement, we want to signal very clearly to all of our people that we will be there to support them if they are experiencing domestic violence.”

The five days’ paid leave could be used to attend medical appointments, legal proceedings or to seek new accommodation.

Two staff who are trained in the handling of domestic violence situations will act as contact points for affected workers. The agreement will cover 2872 staff.

The union’s national president, Jeannie Rae, said research showed that two-thirds of women who had experienced domestic violence were in paid jobs. “Staying in employment is critical to successfully surviving the impacts of domestic violence, so providing additional paid leave and supporting staff by recognising their situation and enhancing their safety at work will make a real difference to the lives of individuals and their children,” she said.

Employers have previously agreed to give workers access to paid domestic violence leave but Ms Rae said the Swinburne agreement went further than other deals struck with universities.

The union is currently bargaining with other universities and is seeking clauses similar to the Swinburne arrangement to be inserted into other enterprise agreements.

The Central Queensland University deal contains a domestic violence provision but does not provide for additional paid leave.

These provisions are similar to a deal struck with the University of NSW in 2011, the first agreement in the tertiary sector to have some form of domestic-violence provision.

“As the first Victorian university to adopt this initiative, Swinburne leads the tertiary sector in providing assistance to victims on their pathway out of violence,” she said.