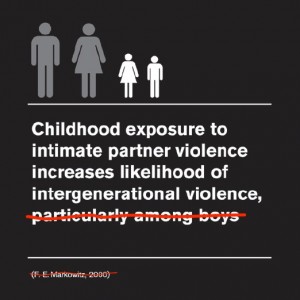 An online ‘domestic violence study’ has been ordered offline by the University of NSW Human Research Ethics Committee.

Flyers published by the survey organisers have been ordered destroyed.

The study, being conducted by the Gendered Violence Research Network, White Ribbon Australia and Youth Action NSW, was found by the Ethics Committee to have breached the University’s code of ethics.

The decision comes after a national coalition of men’s health advocates made a formal complaint to the University claiming the survey was gender-biased, poorly formulated and misleading. They argued it could not achieve its stated aims and any consequent findings would be unreliable and likely to mislead the public.

Chair of the Ethics Committee, Professor Heather Worth, found that a quote on the original flyers claiming that “childhood exposure to intimate violence increased the likelihood of intergeneration violence particularly amongst boys” was incorrect. The ethics committee has ordered that the flyers be destroyed and replaced by a new flyer that has correct information, including any quotes.

Professor Heather Worth also found that the participants’ information sheet referred to by the survey was not accessible as claimed. The Ethics Committee has instructed that the survey be suspended until the link is in place.

Men’s Health Australia spokesman Greg Andresen said, “We congratulate the University for investigating our complaint so speedily and acting upon these ethical breaches. It is essential that domestic violence research, especially that involving young people, is conducted properly.”

“The incorrect statement in question was lifted directly from current White Ribbon ‘Fact Sheets’ that haven’t been corrected. The University’s investigation determined that some of the methodological issues raised in our complaint would be dealt with in peer review of the findings when the authors submit publications for review.

We trust that White Ribbon Australia plans to subject this study to the rigours of the peer review process prior to publishing any reports on its website. It is regretfully common that much gendered violence ‘research’ makes it into the public domain without going anywhere near peer review challenge,” said Mr Andresen.