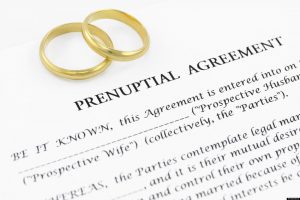 A court has given the green light for a family lawyer to be sued for misleading and deceptive conduct over claims he failed to properly advise a woman about the consequences of signing a prenuptial agreement.

The decision known as Bolden & Woodruff [2018] FCCA 1439 is likely to add to reluctance among family lawyers to advise clients on binding financial agreements, or “prenups”.

The couple, who had been in a de facto relationship for about 11 years, entered into a ­financial agreement in 2015.

The wife, known as “Ms Bolden”, is now seeking to set aside the agreement on the ground she was not properly advised ­by the Brisbane family lawyer ­before she signed it, as required by the Family Law Act.

The husband, known as “Mr Woodruff”, sought leave to join the wife’s solicitor as a respondent so he could sue the solicitor for damages under the Competition and Consumer Act for misleading and deceptive conduct.

In a decision published last week, Federal Circuit Court judge Margaret Cassidy agreed the solicitor should be joined as a respondent, because she said the same set of facts gave rise to the wife’s claim against the husband to set aside the agreement, and the husband’s claim against the wife’s solicitors for misleading and deceptive conduct. She said the Federal Circuit Court had jurisdiction to deal with both legal claims.

Paul Sansom SC said there were difficulties entering into binding financial agreements for couples who were starting out in married life because it was not possible to predict what the ­future held.