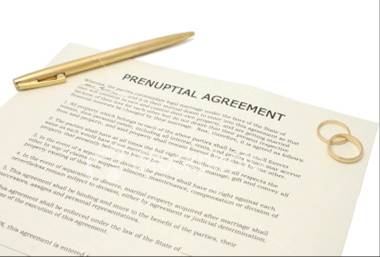 Binding financial agreements are hardly the most romantic of topics for a couple to discuss before they get married or move in together but it is for good reason that they should be raised early in any new relationship.

If you find it hard to talk about your financial position and assets with a loved one over dinner, imagine how hard it will be in the Family Court.

An open airing of all matters financial is exactly what could eventuate if a relationship – whether it is de facto, same-sex or marriage – ends and there is no clear definition of who should get what.

The principal of financial advice company BFG Financial, Suzanne Hadden, says: “If you can’t be frank and upfront together about your assets and liabilities, then what are you doing getting married or moving in?”

One of the more formal ways to document exactly how you both expect assets and liabilities to be divvied up in the event of a break-up is through a binding financial agreement (BFA), which is recognised in the Family Court. Commonly referred to as a prenuptial agreement, a BFA is a legally binding agreement made between two people setting out the division of property in the event of relationship breakdown and other financial issues that might apply during the relationship or separation.

Those most likely to use a BFA are people who have been in an unsuccessful relationship before, have significant wealth prior to entering into a relationship, need to provide for children of a previous relationship, or who want to ensure they will not end up in court fighting over the division of assets if the relationship does not work out.

A partner at family law firm Watts McCray, Jeff Marhinin, says not everyone will make important financial decisions at the start of a new relationship but those conversations should take place early on.

He says discussions about finances and assets may be particularly relevant to people entering a second marriage following a long-term relationship, couples with children from previous relationships, young professionals who have built up substantial assets and the rich and famous who have large amounts of wealth behind them.

“It is not very romantic but planning what people would like to see happen in the event they do break up can be very important. It comes down to whether they want to work things out in the spotlight of the Family Court or cleanly and privately,” Marhinin says.

Couples should also discuss everyday financial matters, such as who will pay bills and other expenses. Marhinin says this should be as much of a priority as defining what would happen if the relationship ends.

Hadden says couples moving in together who want to keep their cash and other assets separate will still have financial issues to discuss, such as how the household budget will be managed.

One common approach is to open a joint account for bill-paying purposes and to meet household expenses. Other financial conversations might be around people’s attitudes to money.

“You might start off with everything separate but over the years things may start to merge. It will help to know what assets and liabilities someone has,” Hadden says.

She warns it’s easy for someone to get “sexually transmitted debt” if they don’t know what a partner is up to with their money.

“You could find your assets being used as security for a partner’s loan or you may authorise a second credit card, which means you are liable,” she says.

One of the most dangerous things to do without any form of protection is to act as guarantor for someone else’s loan. You will have to repay it if the other person fails to do so.

Hadden says couples should talk about insurance and what would happen if one person was to lose their income or to die and who would receive super fund benefits in the event of death.

They could also agree on what they identify as joint or shared property and what should be kept separate – and what would happen if one person received an inheritance.

The division of assets within the Family Court can become complicated once a couple has been living together for two years, or less if one person has made a substantial contribution or you have a child.

DRAWING UP A PRENUP

Imagine that, on the eve of your wedding, your fiance says: “Darling, I love you but I want you to sign this.” If that’s one of the worst ways to approach a financial agreement, then one of the best is to work it out together.

Binding financial agreements (BFA), also known as prenups, are a way of working out who should get what if a relationship ends. A family law specialist, Caroline Counsel, says it’s better for couples to work together on a BFA than to write separate agreements and present them to each other as a fait accompli.

“I have known relationships to end when one party’s lawyer drafts an agreement that solely represents one half of the equation,” Counsel says. “Nobody wants to think about what happens if a relationship ends early or what happens to property or who has to move out if it does end but they are all things that should be discussed and in a supportive environment.

“Trained collaborative financial advisers and lawyers can assist with the difficult conversations that none of us are taught, like what happens if one of us gets an inheritance: is it my money or shared money? How do you feel about money? Or how is someone who has a child in their care going to be protected if a relationship does end?”

It is a legal requirement that each person gets independent legal advice about a BFA. The lawyers representing each person sign an agreement that if the relationship ever goes sour and the BFA is challenged, the two lawyers who helped discuss the contents will not represent either person in court.

“In other words, we are guaranteeing a complete cone of silence around their discussions,” Counsel says.

A good agreement for a couple is one that is signed and put away, never to be thought of again.

“A bad agreement is one that hangs around like a third party and sits like a cold, hard rock in the bed between a couple,” she says. .