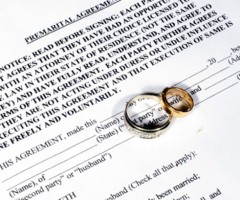 WEALTHY fly-in, fly-out workers are getting pre-nups to avoid losing their assets in relationship break-ups.

Perth family lawyers say the recent wave of mine workers seeking legal protection before marriage is a shift from their usual demographic of older clients in second marriages or from wealthy families.

“It’s something you certainly wouldn’t have seen five years ago,” Mr Bowen said.

“There are a lot of young people in their early 30s who have highly paid jobs with significant assets. They want to keep some or all of these assets separate from what they would acquire together and effectively quarantine them from the Family Court.”

Mr Bowen said while most FIFO workers he saw were men, he also had women clients.

Andrew Davies, a partner with law firm O’Sullivan Davies, said FIFO workers made up about 20 to 30 per cent of the prenuptial agreements he prepared.

“They’re becoming very wealthy people, both in terms of the income that they generate and the properties they’re acquiring at relatively young ages, late 20s and early 30s,” he said.

“It’s both men and women. A lot of the females working up north are earning equally good money and are very focused on being able to build their wealth and then protect it in the event of the breakdown of a relationship.”