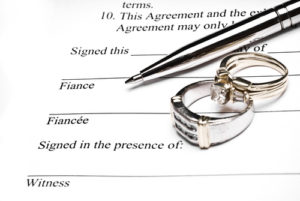 No matter how you approach them, pre-nuptial agreements can’t ever be described as romantic. But an increasing number of couples are signing them, and it’s important not to regard them as a sign of distrust or a warning sign that a marriage is expected to end in disaster.

Research by a wedding website two years ago found 14 per cent of engaged couples sign prenups. Anecdotal evidence from family lawyers is that more and more couples are signing them – especially older couples who have already amassed individual assets, singles with children or people who are entering a second or third marriage.

These couples are committing to each other with their eyes wide open. It removes secrecy. They know one in three marriages end in divorce. They choose to take control of the separation process rather than having an expensive and bruising experience in the Family Court.

It’s best to look on prenups as insurance. You hope your house won’t burn down but you still take out fire insurance. And should the worst happen and the couple split, having a pre-nuptial agreement will save a lot of pain and expense in the separation process.

A prenup can set down anything the couple want, such as who gets what in the event of a marriage breakdown, protecting inheritance rights for children from a previous marriage or maintenance of either party after separation.

A few rules: A prenup has to be in writing, both partners have to sign it and each partner has to have independent legal advice. Those with uneven assets should be careful. A lawyer may warn a partner not to agree to a prenup that leaves them with little spousal maintenance or doesn’t include welfare of children. Each partner has to fully disclose all their assets. If they don’t, the agreement can be challenged on the grounds it was obtained by fraud.

A prenup can also be challenged if the care and welfare of a child will suffer in the separation. A court can also make an order for spousal maintenance if they are unable to support themselves.

It’s wise to review an agreement every five years to allow for changes in the marriage such as illness, children or career change.