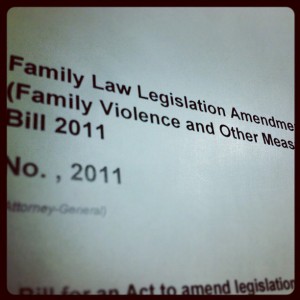 Amendments to the Family Law Act that changed the way the law addresses family violence in family law matters came into force from 7 June 2012. These changes were introduced by the Federal Government following more than two years worth of lobbying and input by the Australian Law Reform Commission, members of Parliament, various representatives of the legal profession and other groups of interest.

Importantly, the changes apply to all family law cases before the Family Court and the Federal Magistrates Court, regardless of whether the proceedings were started before or after 7 June 2012.

What are the amendments?

From 7 June 2012, Family Violence has a more succinct definition and the legislation goes further and actually sets out a list of examples of what can include domestic violence and examples of situations that may constitute a child being exposed to domestic violence (Family Law Act, s 4AB).

Why were the changes introduced?

What do the changes mean for your family law matter?

The main changes we will see as a result of the amendments to the Family Law Act will include:

In cases that do not involve family violence, the amendments to the Act will have little impact upon how the family law courts will determine those matters.

At a State (New South Wales) level, the Government is in the process of preparing a Domestic and Family Violence Framework. This Framework is being set-up following a number of recommendations made by a Parliamentary Committee that was formed to review the current domestic violence legislation and the services available for victims of domestic violence.

The recommendations made by the Committee included the funding of specific domestic violence liaison officers throughout New South Wales, changes to Apprehended Domestic Violence Orders, particularly at an interim level, and greater attention being given to early intervention practices.

We expect to hear more about these changes when the Framework is released for public comment later in 2013. Overall, however, we can be assured that both the State and Federal Governments are trying to streamline legislation and put adequate systems in place to address family violence and to prioritise the safety and wellbeing of children.

Specific Questions relating to this article should be addressed directly to the author.