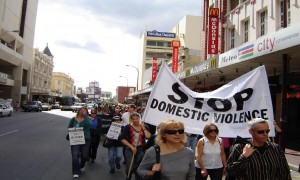 The number of domestic violence incidents in WA has risen almost 60 per cent over the past four years, with police attending more than 44,000 calls for help in the past year.

The figure soared to 13,183 incidents last year, with 16,868 offences recorded and 5385 people arrested or summonsed.

The Women’s Council for Domestic and Family Violence Services WA said police responded to more than 44,000 call-outs to domestic and family violence incidents in the past year.

Family and Domestic Violence Response Teams were set up this year in a bid to offer immediate help to victims.

Police say it is a co-ordinated response focusing on early intervention.

DCPFS director-general Terry Murphy said offers of help were accepted by 42 per cent of adult victims after the incident was reported to the teams.

“Whilst some victims are often overwhelmed by their current circumstances, and do not take up the initial offer of support … (the teams) are able to provide a pro-active follow-up within days of the initial report, allowing victims time to consider what support or assistance best meets their needs,” Mr Murphy said.

Today, 500 people are expected to remember those who lost their lives to domestic homicide.

The 23rd Silent Domestic Violence Memorial March will be held at Stirling Gardens in the city.

She said police figures backed the council’s plea for extra support. “We can’t confidently say that all victims can get the help they need when they need a service,” Ms Hartwig said.

Child Protection and Family Support Minister Helen Morton said any increase in domestic violence was of concern and the Government was strengthening its response to the complex issue.

A new 24/7 co-ordinated emergency response in the metropolitan area will be introduced after a review into WA’s family and domestic violence services.