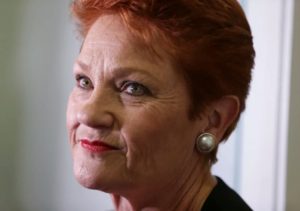 One Nation Leader Pauline Hanson asked the government to make her the co-chair of the parliamentary committee.

Prime Minister Scott Morrison has angered domestic violence campaigners with a surprise decision to hold an inquiry into the Family Court after years of pressure from One Nation leader Pauline Hanson to overhaul the system.

The government launched the inquiry to look into concerns including the onus of proof required to gain an apprehended violence order, the cost of the court process and claims of false evidence being used against former partners.

Senator Hanson applauded the move and asked the government to make her the co-chair of the parliamentary committee alongside former social services minister Kevin Andrews, the Liberal MP who will lead the year-long inquiry.

Campaigners against family violence greeted the decision with dismay just as they arrived in Parliament House to lobby MPs to change the family law system to protect women and children.

“Yet again we have another inquiry set up with people who are not experts in domestic violence,” said Queensland Women’s Legal Service chief executive Angela Lynch.

“I’m exasperated and outraged. This is just kicking the issue down the road again.

“How many more women and children have to die before they do something?”

Government MPs insisted the review would not take sides in the dispute over whether the Family Court was unfair to men who sought access to their children in custody disputes.

“I’ve have many women come to me and they’ve had appalling decisions against them, when they’ve had their children taken from them,” Liberal MP Craig Kelly said.

Mr Kelly, who represents the electorate of Hughes in south-western Sydney, said he had heard from constituents who had to spend hundreds of thousands of dollars to navigate the Family Court.

The terms of reference for the inquiry include the legal standards for domestic violence orders and apprehended violence orders, the powers to ensure truthful evidence, the financial costs to families, the impact of the process on children and any issues that arise for grandparents.

Senator Hanson said she was “pleased to announce” the inquiry was happening after her attempts to get the government to act.

Mr Morrison has overseen a fourth wave of funding for national programs against family violence, committing $328 million in March in a policy backed by campaigners against violence against women.

But the new inquiry took campaigners by surprise and raised fears it would be a vehicle for Senator Hanson’s concern that the system is unfair to men.

Michelle Dörendahl, a Queensland woman whose daughter, Eeva, was murdered by her father, said the courts needed to do more to guard against abusive men who manipulated the system.

“Part of the manipulation of the abuser is to use the system to discount the truth,” Ms Dörendahl said.

“The system is used a lot by perpetrators to continue that control and manipulation of their victims.”

Ms Dörendahl and her former partner, Greg Hutchings, took their dispute to the Family Court in July 2013. Hutchings killed himself and Eeva during a court-approved access visit seven months later.

In a contrast with the fears about the inquiry, the Law Council of Australia welcomed the move as a way to fix “systemic failures” in the family law system due to underfunding over decades.

“This inquiry must involve the whole community – not just politicians, lawyers and bureaucrats,” the Law Council said.

“Those who witness the impacts of the broken system on a daily basis, including families, judges and family violence service providers, must be included.”

But the new inquiry comes at a time when the government is yet to respond to a review of the system by the Australian Law Reform Commission, which handed down 60 recommendations in March.

It is less than three years since the government heard from an earlier parliamentary inquiry, chaired by Victorian Liberal Sarah Henderson, that urged changes to make the system less complex and expensive.

The government is also part-way through an attempt to merge the Family Court with the Federal Court.

Attorney-General Christian Porter has vowed to proceed with the plan by the end of this year even though it was rejected by Labor and criticised by the Law Council.