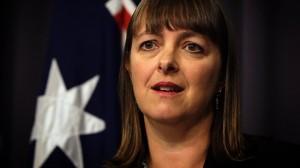 Ms Roxon admitted her department was rewording a contentious clause that redefines discrimination as conduct that “insults or offends”.

But state governments and religious groups remain concerned that other drafting flaws in the 198-page legislation will trigger vexatious discrimination claims.

“It does give rise to the potential for vexatious claims to be made,” Catholic Health chief executive Martin Laverty told News Ltd. “But they’d have no legal standing.

“We don’t provide the full range of reproductive health services and we’re transparent about that. To not provide the service is not to discriminate.”

The Catholic Health code of ethics bans its hospitals from providing abortions, sterilisation or contraceptive procedures, or treatment for IVF or surrogate pregnancies.

Catholic Health has flagged its concerns in a submission to the Senate committee assessing the draft bill.

“To not provide a service on grounds of Catholic teaching is not to discriminate, rather it is a simple limiting of services that Catholic organisations choose to offer as fulfillment of their religious belief,” it states.

“The current drafting of the bill does not allow for this distinction.”

Mr Laverty said yesterday the legislation would require hospitals to prove they had not discriminated against a patient who lodged a complaint.

“Any action would be futile but the reverse onus of proof gives rise to the potential for us to have to defend it,” he said.

“We (now) face the scenario where there needs to be new documentation for every hospital admission, and that there will be a likelihood of increased litigation.”

A spokeswoman for Ms Roxon yesterday said Catholic Health had “misunderstood the legislation”.

Complainants would first need to prove a prima facie case, before defendants were required to prove their innocence.

“Our draft law will not change their ability to decline to perform procedures that conflict with the Catholic faith,” the spokeswoman said.

RCA president Leslie Cannold said many pregnant women using Catholic maternity services did not realise they would be denied a “life-saving abortion”.

“And if a patient decides she wants to have her tubes tied, she won’t be able to,” Dr Cannold, a Monash University academic, told News Ltd.

“If the Catholic health system feels it is entitled to decide what services to provide, it shouldn’t be running public hospitals.”

Ms Roxon yesterday said she had instructed her department at the start of January to develop “alternative drafting” for sections of the bill “that have raised freedom of speech concerns”.

One option was to remove the reference to “insult and offend”, she said.

However, when News Ltd asked Ms Roxon’s office on January 20 whether the words would be removed from the legislation, a spokeswoman for the then-acting Attorney-General, Jason Clare, replied that the government was waiting for the Senate inquiry to report its findings.