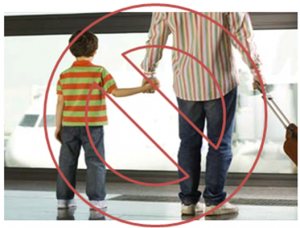 A FORMER British undercover policeman who abducted his children from Australia to Britain has won the latest round of an international custody battle with his estranged wife despite a UK High Court judge saying he had behaved in a “blatant and disgraceful way”.

The man – who cannot be identified for legal reasons – wrongfully removed the children from Australia to the UK in breach of his wife’s custody rights, the High Court was told.

But Justice Jonathan Baker refused to order the children’s “summary return” to their mother in Australia following hearings in the Family Division of the High Court.

The judge said the children might be at risk, because of the nature of the father’s previous work, if immediately returned.

And he said one child had a “clear and unequivocal objection” to returning to Australia and should not be immediately returned because of that.

The judge added that the three children should not be separated and, if one was staying in the UK, they should all remain.

But Justice Baker said his decision was not necessarily the “end of the matter”.

The judge said any further litigation would be conducted in a British court.

Detail of the case emerged in a written ruling by Justice Baker published on a legal website.

Justice Baker said it was right to describe the case as “a particularly flagrant example of a wrongful removal”.

“(The man) accepts that he wilfully removed the children without (their mother’s) consent in breach of her rights of custody as defined under (international law),” said the judge.

“The father abducted the children in a planned and calculating way, without, it must be said, having any proper regard to their safety, given the dangers that exist as a result of his past employment.”

But the judge said the man had, nevertheless, argued against the “summary” return of the children..

Justice Baker said the man had worked for a police force, identified in the ruling as “Z Police Force”, and had been relocated to Australia some years ago.

He said he heard evidence from a senior police officer about the man’s work.

“(The senior officer’s evidence) is to the effect that over the years (the man) has been deployed into situations in which he has come into contact with hundreds of criminals involved in serious organised crime,” said the judge.

“The first defence, advanced with the full support of the Z Police Force, is that a summary return would place the three children at grave risk of harm, or otherwise put them in an intolerable situation, because (the man) has been employed as an undercover police officer for many years and, after being relocated in Australia a few years ago, circumstances have now arisen which render it unsafe for him or his family to return to Australia, at least until extensive further work has been carried out by the Z Police Force and their Australian counterparts, including a detailed and thorough risk assessment.”

Justice Baker said the man’s wife had argued that the risk to the family was no greater in Australia than in the UK.

And she said the assessment of risk to the children should be a matter for the Australian courts.

But the judge ruled in favour of the man and said he had “established a defence”.

The judge added: “I find that to return the children to Australia, and in particular to the same part of that country as before, would put them in an intolerable situation where the risk of harm could not be safely or effectively understood or managed.”

And the judge said he accepted that one of the children did not want to go back to Australia.