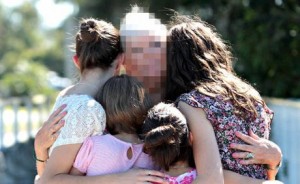 THE man who lists Nelson Mandela and Bill Clinton as former clients is orchestrating publicity for the Sunshine Coast mother of the four Italian girls who have been caught in a bitter custody dispute.

Max Markson was behind the four girls’ “first major interview” about their life in Italy with national magazine Woman’s Day.

The interview, printed this week, revealed how the girls “begged a judge to put them in foster care” instead of having to live with their dad.

Woman’s Day news editor James Graham said there has been an “overwhelming response to the story online”.

“We just thought it was a good story to tell from their perspective,” he said.

“They’ve been the ones in the shadows for so long, but they are the ones obviously directly affected.”

Photographs showing the girls’ faces are splashed on the front cover and their names and the names of their family are provided in detail, despite pending court action against the Courier Mail.

The Courier Mail is facing prosecution for allegedly breaching the Family Law Act by printing photographs of the girls in its coverage of the custody dispute last May.

Mr Graham said as the matter was no longer in the Family Court in Australia it “wasn’t an issue”. Also, he said, the magazine had the “full co-operation” of the mother.

Mr Markson, however, declined the Daily’s request to discuss the interest in the girls because it was “before the courts”.

Woman’s Day would not reveal the cost of the interview.

The former administrator of the Kids without Voices website, Melissa Thompson, has also spoken out about breaking away because of her frustrations with the family.

“The mother is trying to make money to get funds for her Italian lawyer, but in the process of doing this she is trying to hype the kids up and incite fear in them and keep them kicking and screaming,” she said.

Ms Thompson has begun posting on an opposing site.

The girls’ mother said she was “too busy” to respond to the Daily’s request for an interview yesterday.

However, her aunt said the mother was a “natural introvert” and merely trying to raise funds to bring the girls back because “that’s what they want”.

“That’s also why they’re selling the t-shirts online,” she said.