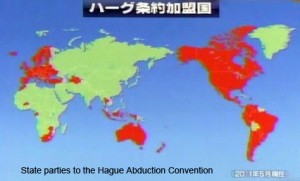 It may have taken more than 30 years, but Japan is finally joining in the 1980 Hague Convention, in which it is required to return abducted children to their usual place of residence in case of failed international marriage.

A government spokesman said that Prime Minister Shinzo Abe’s Cabinet has already given its approval and will immediately submit the necessary legislation to parliament.

Japan is the only Group of 8 member who was not a signatory to the convention. Thus, for the longest time, non-Japanese parents, usually the fathers, are left without a recourse should their former spouse remove the child from wherever they used to live and bring them to Japan.

It is to be noted that unlike other western countries, Japan does not recognize joint custody and it often grants custody to the mother of the child. It looks that things are starting to change now. Chief Cabinet Secretary Yoshihide Suga said, “It is important for our country to join the Hague Convention that sets international rules on dealing with illegal kidnapping of children, now that the numbers of international marriages and international divorces have increased.”

During Abe’s visit last month with U.S. President Barack Obama, he had promised that Tokyo will take part in the treaty. In the past few years, the Japanese government has always said that they will sign the treaty, and yet, it never did. In fact, this issue has been one of the few conflicts between the two countries. This time, perhaps, because Abe seeks to find favor with the U.S. government, he has made good with this promise, whereas others before him obviously have not.