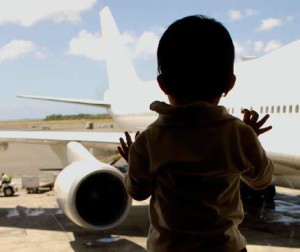 A mother who abducted her three-year-old son and secreted him to Europe for 2½ years has been handed a 28-day good ­behaviour bond by the ­District Court of NSW.

The woman, who cannot be named for legal reasons, was extradited from Europe to ­Sydney to face the charges.

When the boy was three, the mother became convinced the ­father had sexually abused the boy and feared he had involved him in a pedophile ring.

She spirited him away to ­Europe, where the father ­found him in September 2010.

The boy and his ­father returned to Australia in January 2011. The ­mother was extradited to Australia two months later and was held in custody until June 2011.

The mother was convicted by a jury late last year under section 65Y of the Family Law Act of taking the child out of Australia, in breach of parenting orders.

She faced a jail term of up to three years.

She took into account the mother’s good character and said the mother had been punished enough by not being able to see her son.

Last month, Family Court judge Garry Watts ordered the boy live full time with his father in Australia and spend no time with his mother.

Justice Watts said he accepted the mother “unshakably and implacably” believed the boy was sexually abused by his father, but he found the mother had a psychotic illness and was sometimes deliberately untruthful.

“Placing the child with his mother in circumstances where there is no short or medium-term prospect that the mother will gain the insight to seek treatment for that disorder is in fact a highly risky position into which to place the child,” he said.

He said the boy was to have only phone or Skype contact with his mother, when he requested it. A photo of the mother was to be prominently placed in the boy’s bedroom.

Justice Watts found there was no unacceptable risk the father had sexually abused the child or that he had been involved in a pedophile group.

He said the road back to the mother having a relationship with her son was for her to seek treatment for her mental illness.

“I understand the mother will not be able to accept my findings at this time and that she believes I fit into a profile of ­judges which she thinks exist in the Family Court, who brand as ‘mad’ ­mothers who make sexual-abuse allegations against fathers of their children,” he said.