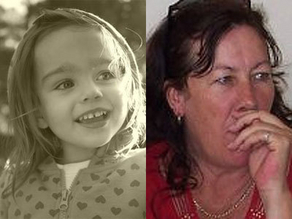 On 8 October 2012 the Family Court of Australia ordered that 4 year old Annaleise Grace Harris-Edwards (DOB 20 December 2007) live with her father. When her father attended her preschool to pick her up Annaleise was not there and has not been seen since.

The Family Court of Australia has now made orders for Annaleise’s recovery.

The Court is of the belief that Annaleise is with her maternal grandmother, Bronwyn Edwards of Castle Hill. Mrs Edwards drives a red/pink Hyundai Excel, the car was captured on safety cameras in the Port Macquarie and Coffs Harbour areas in October.

The Edwards family are originally from Queensland and have family members still living there. It is possible that Edwards is in Queensland or Northern NSW.

Anyone with any information about the whereabouts of Bronwyn Edwards or Annaleise should contact Crimestoppers on 1800 333 000.

Information provided to Crimestoppers can be made anonymously.

Important notes for media:
1. Photographs of the grandmother and child are available from the Family Law Courts website at www.familylawcourts.gov.au under the Family Court missing children section.

2. A Section 121 Publication Order under the Family Law Act 1975 has been made to allow publication and broadcast of the above information. To ensure that media outlets are not in breach of the provisions of the publication order details of this release should not be changed.