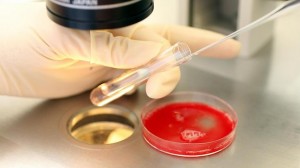 A JUDGE has likened parties in a custody feud between a millionaire businessman and the former flame whom he helped to conceive a child through IVF to warring Shakespearean families.

A Family Court heard the duo kept their IVF treatment a secret from the man’s family because they hated the woman.

“What this is telling me is I’ve got the Montagues and the Capulets,” Justice Paul Cronin said.

The man is seeking joint parental responsibility and regular access to the child born after years of IVF treatment.

He is also asking the court to rule on whether he is legally the boy’s parent, a finding that could have ramifications for hundreds of donor conceptions.

The court heard the woman always intended to raise the child as a single mum.

After the child was born, the man would regularly visit him at the woman’s home, until the relationship between the two deteriorated in late 2011.

Notes from IVF counselling sessions read to the court stated the woman felt deceived after the man revealed he had a secret girlfriend of two years, who discovered he was the biological father of the child and threatened to tell his parents.

A clinical psychologist said the biological parents were intelligent and articulate people, who could make good decisions for the child, in a bad situation.

He said they both feared that if ordered to share parental responsibility the other party would use it as a weapon of control.

Under Victorian law, a man who donates sperm is not considered the father of any resulting children.

The man’s legal team are arguing the Family Law Act, which is silent on the issue, overrides state law because it is Commonwealth legislation.

Justice Cronin said the case was “a little odd, a little different”, but dealt with the same issues of mistrust and even dislike seen in many custody battles.

The hearing will continue today.