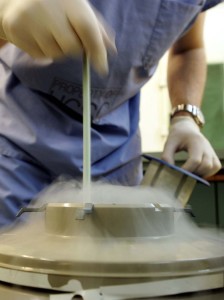 A WOMAN cannot fulfil her late partner’s final wish and have their child by IVF because the Family Court lacks jurisdiction over his frozen sperm.

In a ruling published on the court’s website this week, Justice Garry Watts says he has no choice but to refuse the woman’s plea because her de facto partner died before giving her written consent to access his genetic material.

The judge says he cannot intervene – even with the blessing of the man’s sister and executor of his will – because it is not a matrimonial or property matter.

Reproductive specialists yesterday called on courts to honour a person’s verbal consent, saying not every couple gets the chance to put things in writing.

In his judgment, Justice Watts says the man, who cannot be identified, deposited sperm with an IVF clinic before he was diagnosed with non-Hodgkin lymphoma.

He and the woman fell in love during his successful chemotherapy.

They told friends and relatives they planned to marry in 2012 and “start a family immediately”.

The cancer treatment, however, took a toll on the man’s health and he committed suicide.

Subsequently the woman and her partner’s sister, who is executor of his estate, asked the clinic to release his sperm.

It refused because the man had not listed the woman as his partner on the sperm storage form.

However, the clinic agreed it would grant access if served with a court order.

In his judgment, Justice Watts says those factors are insufficient.

“I accept (the couple) formed a loving and committed relationship and discussed between themselves and family members the intention to marry and start a family,” he says.

“I further accept that (his) purpose in storing a frozen semen specimen was in the anticipation that it would be used to conceive a child – and that he subsequently formed the intention that the mother of that child would be (his partner).

“Unfortunately I conclude this court does not have any jurisdiction to make orders in accordance with the application that has been made.”

He says the court is limited to considering only matrimonial, defacto, property and child matters.

“I have no alternative but to dismiss the application,” he said.”

“When it comes to dealing with reproductive rights after death, courts get bogged down,” she said.

“People die unexpectedly and consent does not always get to be written down.

“If there are multiple, credible witnesses to a deceased person’s intent, that should be honoured as would written consent.”

She urged donors to ensure their consent forms and information were updated regularly.

“Couples plan their house and their life insurance – they need to plan their fertility as well,” she said.

“They need to discuss what, in the event of death, they want to happen.

“Put it in your will, get it written down and then update it as often as needed.”

“This is a tragic case, and not something you’d want to see happen to anyone else,” she said.

“The difficulty is that, when a person has died and their consent is not written down, you can’t ever be sure what their wishes were.

“Control over one’s stored material is a fundamental right… people must discuss their wishes with their partners and make sure forms are signed.”