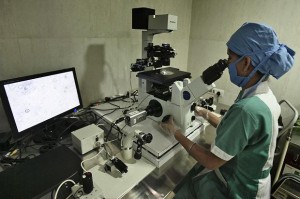 THE first baby with three parents could be born as early as 2015 after a landmark decision to move ahead on a controversial genetic treatment.

Britain could become the first country to sanction the creation of babies with three genetic parents, despite fears it might lead to ‘designer babies’.

The Government will publish draft regulations later this year that will bring techniques a step closer to giving women affected by devastating hereditary diseases the chance to have healthy children.

The techniques involve replacing defective DNA in the mother’s egg with material from a donor egg. The resulting healthy child would effectively have two mothers and a father.

For the first time the ‘germ line’ of inherited DNA from the mother would be altered which, critics say, marks a turning point in the ethics of test-tube babies.

But the Government’s chief medical officer, Professor Dame Sally Davies, said the alteration did not affect fundamental DNA that determines an individual’s make-up such as facial features and eye colour.

She compared the new techniques to replacing a defective ‘battery pack’ in a cell that would virtually eliminate the chance of a severe disease in the child.

She said: “Scientists have developed groundbreaking new procedures which could stop these diseases being passed on, bringing hope to many families seeking to prevent their future children inheriting them.” If MPs approve the regulations at the end of next year, the first patients could be assessed and approved for treatment in 2015.

Dame Sally denied the UK was leading the way to designer babies. She said there was a ban on changing nuclear DNA which “I don’t see changing in the foreseeable future”.

Josephine Quintavalle, from the group Comment on Reproductive Ethics, said: “Our focus now turns to Parliament, where we hope that the proposals to create three-parent embryos will be voted down.”