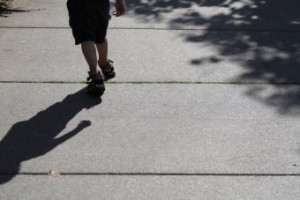 A GRANDMOTHER has fled with her four-year-old granddaughter after a judge ordered the toddler live with her father despite claims the father sexually abused her.

The western Sydney woman has led police and authorities on a month-long chase after going to ground and leaving no clues to their whereabouts.

The pair vanished on October 8 when Family Court judge Justice David Collier awarded full custody of the child to the father, 34, following a bitter court dispute.

The 55-year-old grandmother has until the next court date on November 13 to surrender the child before the court considers whether to issue an arrest warrant.

The mother launched the custody battle in the belief the father sexually assaulted the child multiple times when she was under his care. He has denied the allegations.

But the court action backfired horribly when Justice Collier instead took aim at the mother, finding she was motivated by hatred of the father.

Officers have visited the 33-year-old mother’s house numerous times and seized items including her mobile phone and photos.

Although the mother declined to comment to The Sunday Telegraph because the court case is ongoing, a source close to her said the decision had left her shattered.

The source said the order meant parents were powerless to act if they suspected their children were being abused.

“What would you expect a mother to do if she not only suspects – but believes she has evidence – that her daughter has been sexually assaulted in the father’s care?” the source said.

“As a mother you could never sit back and do nothing.

“She’s raised her concerns through the proper channels and all that’s happened is that she’s had her daughter taken off her.”

The mother gave evidence to the court of at least 17 occasions where she believed their child allegedly showed signs, or was at risk, of being sexually abused.

Judge Collier said the evidence did not prove the child had been sexually assaulted.

The toddler was born after her parents had split up and has lived predominantly with the mother. The father spent supervised time with the girl.

Justice Collier ordered the child live with the father and restricted the mother to having no contact in the first month, followed by supervised visits at a contact centre.

Justice Collier said the mother’s allegations were motivated by an intense hatred of the father. After considering the evidence, he found there was not an “unacceptable risk of sexual abuse” from the father before awarding him full custody.

The judge found that if the child stayed with the mother it was likely the woman would poison the child’s mind and make her hate her father.

But before the girl could be handed over, the grandmother took the child and fled.