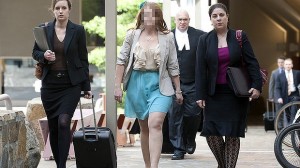 THEY are pictures no one is likely to forget. The images of four young girls, essentially being forced from their mother’s arms, as Australian Federal Police officers prepare to take them to a place they don’t want to go.

What has been left is a confused and angry public, struggling to understand how the courts, the government and society could have failed one Queensland family so badly that four innocent children had been wrenched from their mother and taken to the other side of the world.

For the past two years, the four girls have been at the centre of an international custody battle, which began when their mother took them from Italy to Australia for a holiday and didn’t return.

On Wednesday, a Family Court judge dismissed an application from the mother to discharge the return order, the children were given in to the custody of the Department of Child Services and arrangements were made to return them to Italy.

The mother can’t return to Italy

Justice Forrest noted in his October 3 judgment that the children’s main objection to returning to Italy was the mother’s ”stated intention, apparently made abundantly clear by her to the children over a period of several months at least, that she will not return with them to Italy”.

The mother put forward that, as a full-time university student receiving financial assistance from the government to support herself and the children, a return to Italy, where she had only worked in a variety of unskilled jobs, was not economically feasible.

Justice Forrest ruled the mother was not impeded, but instead possessed a ”preference” not to go.

The mother maintained in the media and in court she feared arrest or imprisonment if she returned to Italy, an estimation Justice Forrest understood, but rejected.

”However, quite apart from the obvious question as to whether the fear of a consequence for one’s own wrongdoing should be part of circumstances that an applicant seeks to set up as exceptional so as to justify discharge of a return order, I am not satisfied, on the evidence before me, that arrest, charge and imprisonment actually awaits the mother on return to Italy.”

The mother made inquiries with an Italian lawyer who determined even if she was prosecuted, she would most likely receive probation.

The Australian courts awarded custody to the father and the system was ruling on the best interests of the girls.

”That was not my responsibility,” Justice Forrest said.

”Indeed, had I determined either of those things, I would have erred at law. That is because the multitude of nations that negotiated the terms of the Hague Convention determined, by the provisions written into the Convention, that when children are wrongfully removed or retained away from the country of their habitual residence, court proceedings to determine which parent they should live with, and in which country their best interests are met, should take place in that country of their habitual residence, from which they were wrongfully removed or from which they were retained away.”

The judge punished the mother for taking the case public.

The mother’s decision to take her side of the story public and reveal the girls’ identities in the media has been discussed and lamented in the courts, but it played no role in the Family Court’s decision.

”The very public nature of the campaign has been very disturbing. I am satisfied that they have definitely not been shielded from the dispute and have clearly, I find, been significantly influenced in their views and their conduct by their mother and other members of her family.”

The mother did not prove any of the four preconditions available in regulation 19A of the Family Law Act pertaining to Child Abduction in Australia and Justice Forrest dismissed the application on that basis.

The mother was not given an opportunity to state her case

The children were brought to Australia by their mother in June 2010 for what their father believed to a four-week holiday.

When the mother told the father she was not returning, he invoked the provisions the Hague Convention.

Justice Forrest ruled on June 23, last year that the children be returned to Italy. The mother appealed and the return order was stayed pending the outcome of the appeal.

The Full Court of the Family Court dismissed the appeal. The mother applied to the High Court for special leave to appeal against the Family Court’s decision to dismiss her appeal – then withdrew it.

The date for the return order (May 2012) drew close and the children were ”taken into hiding” by their great-grandmother.

While the children were in hiding, the mother applied for a discharge of the return order and claimed she had been hampered by a lack of legal representation at the original hearing.

One of the children’s maternal great-aunts applied at the same time to be given leave to intervene as a case guardian for the children.

Justice Forrest refused to hear the mother’s application while the children were missing and ruled the great-aunt had no standing.

The maternal great-aunt applied to the High Court for a judicial review (prerogative relief). The children were found a week later.

The mother was granted temporary custody of the children, with the father to have visitation rights, while legal proceedings were played out.

The great-aunt’s application was dismissed by the High Court.

The custody issues will be argued in the Italian courts.

The girls were deported

Justice Forrest’s judgment does not refer to the children being deported, rather as being ”returned”.

Before June 1999, under section 200 of the Migration Act, deportations were used to remove and exclude people with character concerns permanently from Australia.

These days, deportation is not used very often as, in most cases, people who have committed a crime serious enough to warrant removal from Australia will have their visa cancelled under the character provisions (section 501) of the Migration Act (s501 began from June 1, 1999).

They are then unlawful non-citizens who are subject to detention and removal provisions (section 198).

The children committed no crime and as dual national Australians, are entitled to return to Australia. However, as they are all under 16, they are still at the mercy of custody orders, which will be a matter for the Italian courts to decide.