Although we take it as a given that conflict and property dispute are part and parcel of divorce, this is not necessarily the case with the majority of divorcing Australians, at least as far as this very recent study from the Australian Institute of Family Studies.

A recent large-scale AIFS study of post-separation property division in a decade — involving 9000 separated parents from around Australia — has found most divorcing couples manage to divide their assets themselves without lawyers.

In a presentation to the 13th Australian Institute of Family Studies conference on Friday, researchers will report that separating couples generally do not have a lot of money to split and mostly sort things out themselves fairly quickly, avoiding long battles.

AIFS senior research fellow Rae Kaspiew (nee Rae Aspire) said the findings were based on married and cohabiting parents who had been separated about five years, many with preschool or school children.

“We found that close to half had finalised their property division within a year, although this took longer if couples had more assets to divide. For example, of those with more than $500,000, four in 10 took more than two years to finalise settlement,” Dr Kaspiew said.

“By comparison, more than two-thirds of parents with under $40,000 in assets had resolved property division at the time of separation, but even many of those with considerably more property to divide had sorted things out in less than a year.

“Of those parents with assets to divide, the average property pool was $261,000. Married couples had generally accumulated more assets, compared to those cohabiting. Just over a third of those separating after marriage had assets of more than $300,000.”

Research co-author and AIFS senior research fellow Lixia Qu said most men and women judged their settlements fair ­although between 30 and 40 per cent did not.

The five-year study of 9000 separated parents found the average value of assets at separation is $202,900, including those who had no assets or debts.

Dr Kaspiew said parents across all income levels had generally sorted out their own affairs, with 39 per cent of settlements achieved through discussions and 18.8 per cent ‘just happening’ without specific action. 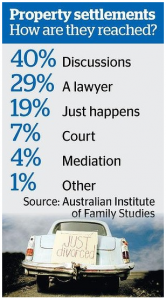 However, the involvement of lawyers rose as the assets in question rose in value.

When assets were under $140,000, most cases were handled through discussion but once values rose above $140,000, more cases went to a lawyer.

Dr Kaspiew said the study, the first large-scale, systematic analysis of property division in Australia for 13 years, had thrown up some interesting findings.

The report found mothers received substantially more assets in a settlement when they were caring for children most of the time and that the parent who left the family house tended to receive less.

It also found fathers tended to over-estimate the share of property their ex-partner received, while both parents tended to underestimate their own share of a settlement.

“Factors associated with reports of unfairness related to an individual’s eventual share of the settlement; who left the house; and whether they had experienced family violence,’’ Dr Qu said. “Debate about fairness also focused on people’s views of how much they had contributed to the relationship in financial terms, as well as the value placed on particular roles, such as the care of children.”

The research surveyed parents of young children who were newly separated in 2008 and registered on a child support programs.

It will be presented to the Australian Institute of Family Studies conference in Melbourne on Friday.

The conference runs from July 30 to August 1.