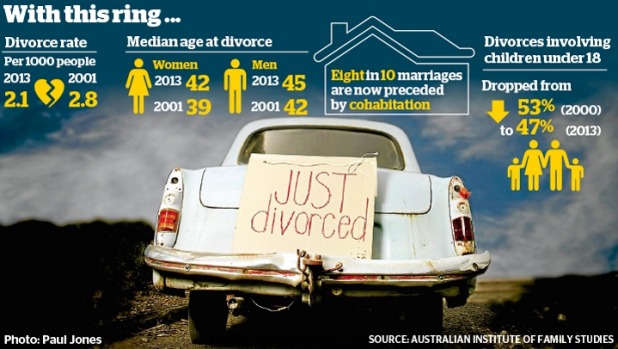 Divorce is on the wane in Australia as people think more carefully about their choice of life partner before saying “I do”.

Statistics from the Australian Institute of Family Studies show divorce has gone out of fashion this millennium, with the crude divorce rate falling from 2.8 per 1000 people in 2001 to 2.1 in 2013. The decline in divorce is particularly noticeable among couples aged 25-40.

“Marriage has become a more considered decision than in the past,” the institute’s researcher Lixia Qu said.

Divorce peaked in 1976 after the introduction of no-fault divorce.

Couples are also road-testing relationships by living together before marriage. Eight in 10 marriages are now preceded by cohabitation. “Cohabitation serves as a weeding-out process,” Dr Qu said.

Relationships Australia Illawarra manager Rhonda O’Donnell said couples have become more cautious about making a life commitment. The median age for first marriages is now 30 for men and 28 for women.

“People are delaying marriage until later, they’re older, they’ve often lived together and they’re being more considered about their choice [of partner],” she said. 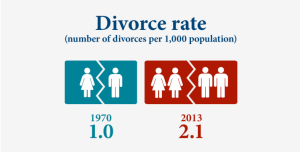 Ms O’Donnell noted that many couples had experienced the divorce of their parents growing up, and did not want to end up in the same predicament.
Those that do marry are increasingly choosing a secular ceremony. Whereas an equal number of marriages were performed by a civil celebrant as a religious minister at the turn of the century, now only a quarter of marriage ceremonies are religious.

The proportion of divorces involving children under 18 has also dropped this century, from 53 per cent to 47 per cent. While the average length of a marriage that ends in divorce is 12 years, one in five divorces now involve couples who have been married for 20 years or more. 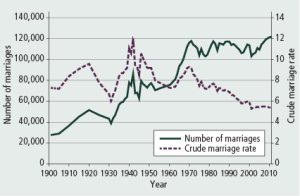 Couples are increasingly waiting until their children have left home before splitting up, to protect them from the fallout. Women are also likely to be back in the workforce, putting them in a more independent financial position. The median age for women who get divorced is now 42 (compared to 39 in 2001) and for men it is 45 (compared to 42).

When parents do separate, only 6 per cent of children under 17 spend their time equally with both mother and father. Three in 10 children see their non-resident parent daily or weekly, but an equal proportion sees that parent less than once a year or never.

Half of all children whose parents are separated do not spend any nights at their non-resident parent’s house. Dr Qu said many of these children were either too little to stay away from home, or older teenagers who preferred to spend time with their friends.