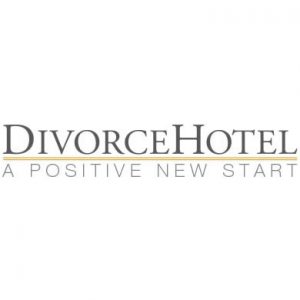 After 35 years of being married to Jan, Paul came to the realisation he was gay.

While there was no bad blood between the pair, it was clear they could no longer stay married.

However, the idea of getting a divorce seemed cumbersome. Jan, a 56-year-old optical advisor from the east of England, visited a divorce lawyer to gather information but left with a bitter taste.

“I just got the feeling that he would have been all out to get as much [money from Paul] as possible, and I didn’t really want that.”

When Jan was scrolling through Facebook one day she stumbled across a different solution – an ad for a company called DivorceHotel.

The premise is simple: couples check in to a hotel in two separate rooms for two nights, where they undergo mediation processes behind closed doors and away from outside responsibilities.
The idea is that, over the course of a 48-hour hotel stay, all divorce arrangements can be made.

Jan and Paul booked in for their DivorceHotel in December 2017.

“I know it might sound strange but I actually looked forward to going away for those two days,” says Jan.
“It meant we had 48 hours where we were not going to be disturbed by children, not having to think abut shopping, food, cooking, anything, to have no distraction.”

She also liked the idea that the proceedings would occur on neutral ground.

While they’d “loosely” agreed on the terms of their divorce beforehand, Jan said it gave them the opportunity to “get down to the nitty gritty and get it sorted right down to the last thing”.

And, within their time at the hotel, they did just that. “Everything was all done.”

While Jan had a successful experience, she’s quick to note this kind of proceedings will only work for people on amicable terms when parting.
DivorceHotel is the brainchild of CEO Jim Halfens.
He came up with the idea after witnessing his best friend’s “extremely messy” divorce, says David Leckie, global director of DivorceHotel International.
“This led Jim to think that there just had to be a better way to do divorce.”
His idea involves providing all the professional support a couple need to arrange their divorce (“lawyer, mediator, financial advisor, maybe therapist”) all under the same roof at the same time.

Halfens developed the idea in the Netherlands around seven years ago and the company is now operating in the US and the UK, with an Australian expansion planned for 2019.

While 48 hours might seem quick, a married couple in Australia have to be separated for a year before they can file for such proceedings. Hopefully, in that time, she says both parties would have reconciled their differences emotionally so they’re ready to nut out the details of parting.

However, she believes the process wouldn’t work for everyone.

“If the situation is still an acrimonious one, this process might not be a good one to enter as one party may still feel extremely hurt… and not ready to go through with it,” says Draper.
“Staying in a hotel alone might not be the best thing for this particular person as they would need the familiarity of their home and support of their extended family members and friends.”
Draper says couples with older children may also benefit from involving them in decisions about splitting their time between each parent’s residence. However, such details could be worked out at the hotel and then confirmed with their offspring later.

Finalising her divorce wasn’t exactly a pleasant experience, says Jan. Rather, she says it was a “positive” one.

“It’s very intense and very emotional, obviously,” she says, although she thinks tackling the whole thing in a weekend was the best choice for her.
Instead of hiring two separate lawyers and having a divorce “drag on for months and months with paperwork going backwards and forwards between [them]”, Jan was thrilled the whole process was over in a couple of days.

“It was a good experience. I would definitely recommend it.”