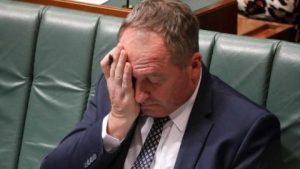 One of the many questions around Barnaby Joyce’s marital split is what happens to his superannuation – especially because Australian politicians’ entitlements are particularly generous. How super is split is a key issue in separated households with children where one parent – often a woman – took time off to be the main caregiver and the other was the main breadwinner (and stasher of super).

In Joyce’s case, says financial planner Justin Hooper of Sentinel Wealth, his term began on July 1, 2005 so he is not part of the super-generous Parliamentary Contributory Superannuation Scheme (PCSS). This defined benefit scheme, which offers a lifetime pension, was available only to members in office before October 8, 2004.

Parliamentarians elected after that, says family lawyer Juliette Ford of Farrar Gesini Dunn, may nominate a complying superannuation fund into which contributions of 15.4 per cent are made by the government on their behalf. This is still generous compared with most other super schemes where employers contribute 9.5 per cent in compulsory super. “I would anticipate his superannuation entitlement will be a significant asset to be divided,” Ford adds.

Do couples in this situation need to wait for divorce before dividing super? No, says Ford. “Separation is the trigger point to negotiate a property settlement and not divorce,” she explains. “Once a relationship is finished, the parties can enter into negotiations immediately to finalise their property settlement or commence proceedings.” In any case, divorce is not possible until there has been a year of separation.

But if one partner has already started a relationship, says Andrew Yee of HLB Mann Judd, timing can be crucial.

“If not divorced but separated and the relationship has broken down, it is better to seek an agreement or court order to claim an entitlement to super as soon as possible after the relationship has broken down,” he explains. In cases like Joyce, where a new de facto relationship/partnership has been started, “the new partner will be entitled (without a binding financial agreement – ie, “prenup”  – already in place) to a share of his super assets”. But if there is a pre-existing super split in place with the first spouse, he says, “latter” spouses can’t make a claim that reduces the former spouse’s entitlement.

Are super benefits split 50:50? Not necessarily says family lawyer Marilyn Hauptmann. Two pools of assets (super and non-super) are taken into consideration, as well as how each partner contributed – both financially and as a homemaker. “In some super funds you can’t have a super split,” Hauptmann says. “Then just the non-super assets will be divided but [the agreement] will take into account that one party has a super entitlement worth x amount.”

So what do separated partners need to do about super?

“Generally it forms part of the usual pool of assets, but there is a specific process in dealing with it upon relationship breakdown,” says Yee. These steps include:

There are risks in not formalising a property settlement as soon as possible, says Hooper. “You may not get stamp duty exemptions and capital gains tax rollover relief on the transfer of property. Each party remains exposed by a claim to the other which could capture future windfalls such as inheritances. And in the event of death, the new partner could be eligible to make a claim against the super benefits.”