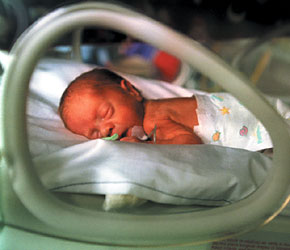 Parents of babies born severely premature or with serious abnormalities are turning to the courts in a bid to override medical opinion to commence or continue life-sustaining treatment for their infants.

It is difficult enough for parents to witness the birth of their child with such an acute handicap; it can be incredibly confronting when they are presented with the views of their treating doctors that it is not in the best interests of the child to keep him or her alive.

Doctors, on the other hand, are reluctant to commence or continue futile treatment for extremely premature infants when they consider that the burdens outweigh the benefits, in addition to the infant having a poor quality of life.

The edge of viability

Infants being born too “early” is not a new phenomenon in the span of human history; the drive to save premature babies did not arise from any sense of duty or benevolence to protect or nurture the young. The development of neonatal care units began in 19th century Europe as a state-sponsored campaign to rebuild destroyed populations, variously affected by famine, poverty and war.

Today, the “edge of viability” — the earliest time at which a baby can be born alive — is approximately 23 weeks. A little over the half way stage of a full-term pregnancy, this is a crucial milestone. In Victoria, a woman can have a legal abortion or potentially give birth, both at 23 weeks.

Doctors talk about “premmies” or infants having severe malformation or abnormality. These infants generally begin their little lives suffering pain. Many cannot see or hear, lack neurological awareness and will never be able to walk or stand. The prognosis for such infants is acutely poor and unlikely to improve.

Doctors and parents have tended to make treatment decisions for these babies by looking at what is in the infant’s best interests, in agreement with one another. But parents are increasingly seeking the court’s input to override the medical team’s recommendation, often fuelled by widely publicised stories of “miracle babies” surviving against all odds. American paediatricians John Lantos and William Meadow have described parents’ perceptions of the neonatal intensive care unit (NICU) as “a place where miracles will happen and babies are snatched from the jaws of death”.

As medical science has progressed, and a hungry media has published stories of survival against all odds, doctors have become victims of their own success, giving more parents hope for their prematurely or extremely sick babies.

Doctors in the United Kingdom are well practised at navigating these legal and ethical hurdles, because cases have been coming before the English courts for more than 30 years. In a majority of cases in the UK the courts have agreed with medical opinion that withdrawal or withholding life-sustaining treatment from critically ill infants is in their best interests.

In Australia, however, it was not until 2011 that the courts were asked to consider such a dilemma.

The first such Australian case is known as Baby D (No 2)(2011) FamCA 176. Baby D’s parents and doctors agreed that removal of the ventilation tube and palliative care was in her best interests, leading to her death. The judge concluded that any treatment decision was up to baby D’s parents in conjunction with the doctors, and that no criminal sanctions would apply if death came as a result.

Two months ago the second Australian case was heard. The parents of nine month old Mohammed sought an order from the court to ensure he was kept alive via mechanical ventilation to prevent oxygen deprivation. Born with various incurable medical conditions, Mohammed cannot see, hear, move, suffers seizures and cannot respond to touch without significant pain. The courts agreed that such treatment is not in his best interests as there is no cure for Mohammed’s conditions.

With only two cases to date, and, within a year of each other, it is too early to tell what decisions the courts will give in future life and death matters, and what reasoning judges will take into account. If the number of cases that have been and continue to go before the English courts is any indication, it should be a red flag to Australia to act now and set the bar for decision-making processes in such cases.

Time is now of the essence for the Australian government to recognise that similar cases are likely to be just over the horizon, as parents and doctors increasingly disagree on treatment options and seek outcomes from the courts. The Australian government has a real opportunity to prevent these cases making it before the courts at all, by creating a framework to decide future scenarios of this kind.