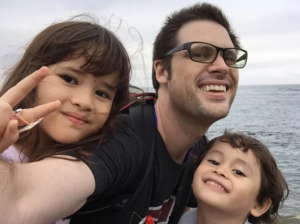 Freelance journalist Scott McIntyre with his two children in Japan.

An Australian man faces the prospect of three years in jail in Japan after a desperate bid to track down his two young children, who were taken by their mother in May without his consent.

Scott McIntyre, an Australian freelance journalist based in Tokyo, has been charged with illegal entry, which under Japanese law carries a maximum penalty of three years in jail, or 100,000 yen ($1327).

“I’m desperately worried for Scott’s future,” said Mr McIntyre’s mother Lynne. “He’s been through so much already. If he gets three years it will completely destroy him.”

Mr McIntyre, 45, has been living in Tokyo with his wife since 2015. After the breakdown of their marriage, the children went to stay with their grandparents for a night and never returned.

Friends say he has not heard from his wife or children since and does not know their whereabouts. Mr McIntryre’s wife did not respond to requests for comment.

In late November, Mr McIntyre allegedly gained access to the apartment block where his parents-in-law live. It’s thought he then knocked on their door, requesting information about his children.

The police were called and he was arrested. Since then, Mr McIntyre has been held in Takaido detention centre, in west Tokyo, where he is allowed one shower every five days. His cell is lit for 24 hours a day and he cannot wash his clothes.

“He gets one 20 minute visit a day,” said friend Catherine Henderson, who visits him regularly.

“We take stuff for him like clothes and books, but they are often refused. There is no privacy, even for the toilet.”

Mr McIntyre was sacked as a sports reporter by SBS in 2015 after he published tweets about Anzac Day which were deemed “inappropriate” and “disrespectful” by then SBS boss Michael Ebeid and then communications minister Malcolm Turnbull.

He commenced unfair dismissal proceedings against SBS and the parties settled in 2016.

Japan is one of the few developed nations in the world that does not recognise joint custody upon separation. Even if a court order does provide for shared custody, visitation rights are routinely ignored. 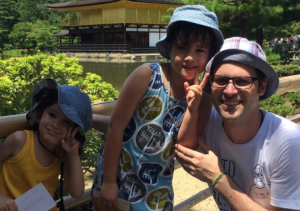 Scott McIntyre says he has not seen his children since his wife took them to stay with their grandparents in Japan.

There are no official figures, but it’s thought up to 20 children every year are snatched from Australia and taken to Japan without the consent of one parent.

“Japanese law makes it very hard to get those children back, which is why Japan has become known as a black hole for child abduction.”

Japan is a signatory to the Hague Convention on the Civil Aspects of International Child Abduction, which provides a legal process through which a parent can seek to have their child returned to their home country.
But Japan has been widely criticised for non-compliance. In any case, the convention only applies to international abductions. It is of no help to Mr McIntyre, whose children were abducted within Japan.

Embassy officials have visited Mr McIntyre in detention. It’s expected he will face court in January. Prime Minister Scott Morrison will also be in Japan in January, to discuss a defence cooperation agreement.

“While he’s there we’d like the Prime Minister to raise this issue of child abduction with the Japanese government,” Mr McIntyre’s father Laurie said.

“Scott’s not the only person this has happened to. Other Australian kids have gone missing in Japan. Someone has to do something about this.”