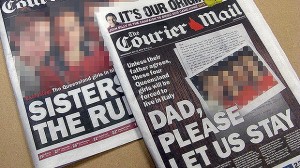 A Queensland newspaper has been fined $120,000 for illegally identifying a family involved in a court custody battle.

Queensland Newspapers, which owns The Courier-Mail, was sentenced in the District Court in Brisbane on Monday for breaching restrictions on publishing court proceedings.

The newspaper published names and photos of a mother and her children involved in a Family Court dispute on its front page in 2012.

Australian media are prohibited from identifying anyone involved in Family Court proceedings.

“It seems to me that the newspaper seized upon what it regarded as a sensational story, which would be attractive to readers, and put the story ahead of its legal obligations,” he said.

The court heard Queensland Newspapers breached the law four times by identifying the family members in four newspapers across a week in May 2012.

Journalists were warned multiple times by a court staffer and a legal officer about the ramifications of identifying the family.

Justice Martin fined the company $30,000 per breach, saying the offending was in the worst category and the newspaper had shown no remorse.

The maximum penalty is $33,000 per breach but the judge took into account the newspaper’s lack of criminal history and its contribution to the community.

He said the fine was severe enough to deter ‘‘like-minded’’ publishers.

‘‘This was persistent, serious offending in deliberate defiance of the law and importantly in complete disregard of the interests of four children,’’ he said.

General manager of The Courier-Mail and The Sunday Mail Jason Scott was present in court but was not required to speak.

The company has one month the pay the fine.