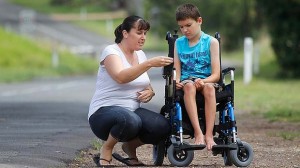 The parents of a severely disabled NSW boy have lost their $10 million damages case against an IVF specialist who failed to properly warn them of the likelihood their son would inherit a rare blood clotting condition.

The couple now face the prospect of having to pay the doctor’s legal costs, which will almost certainly run to tens of thousands of dollars.

The plaintiffs suffered no harm consequent upon Keeden inheriting ATD.

Just days after Debbie and Lawrence Waller gave birth to their son Keeden in August 2000, the infant suffered a massive stroke that caused severe brain damage and meant he was never able to walk, talk or go to the toilet.

The Waller’s claimed the stroke was the result of a rare blood clotting condition known as antithrombin deficiency [ATD] which Keeden inherited from his father.

The couple were not properly made aware there was a 50 per cent chance that Keeden would have the defective gene and sued the IVF specialist who oversaw his conception – Christopher James – in the NSW Supreme Court for what is known as “wrongful birth”.

They said that, had they been properly informed of the risk Keeden would inherit his father’s condition, they would not have gone ahead with the IVF treatment that resulted in his birth.

They sought compensation in the order of $10 million for the lifelong care of their handicapped son.

But on Monday – 15 months after the case was heard – Justice John Hislop rejected the Waller’s damages claim and ordered them to pay Dr James’ legal costs.

Crucially, Justice Hislop found that the Wallers had not proved that the stroke Keeden suffered was actually caused by the blood clotting condition he inherited.

“I find that, properly informed, the plaintiffs would have elected not to have Keeden,” Justice Hislop said in an 111-page judgement.

“[However] in my opinion the plaintiffs have failed to establish that the CSVT [stroke] was caused or materially contributed to by the ATD.”

“The plaintiffs suffered no harm consequent upon Keeden inheriting ATD.”

Dr James was, therefore, not liable for the harm Mr and Mrs Waller have suffered as a result of Keeden’s disability.

In accordance with standard practice in civil cases, the Wallers were ordered to pay Dr James’ legal costs. Given that the hearing ran for four weeks, these costs are likely to run to tens of thousands of dollars – a major blow to the struggling family.

It is not the first time the Wallers have been to court in relation to their son. In 2006, they launched an unsuccessful “wrongful life” case in the High Court on Keeden’s behalf, in which he sought compensation for future loss of earnings and opportunity.