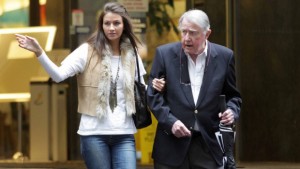 His life was marked by a remarkable political legacy, coupled with extra-ordinary business success post-politics.

Wran died in April last year (2014) aged 87 after suffering dementia. He left a fortune estimated to be worth up to $40 million, largely made up of an impressive property portfolio.

This estate is at the heart of a dispute within his extended family.

In an attempt at resolving the battle for Wran’s estate without expensive and lengthy court proceedings, negotiations will be heading behind closed doors, with the parties agreeing to mediation.

Wran’s youngest children, Harriet and Hugo Wran, by his second wife Jill Hickson Wran, have since joined the claim, as has his New Caledonia-born god-daughter Helene De Poortere. Mrs Hickson Wran is also a defendant.

During a hearing in the NSW Supreme Court late last month, Justice Philip Hallen was told the actual estate is valued between $700,000 and $1.6 million. But the notional estate, which could include superannuation, family trusts and real estate held with a joint tenant, is thought to be worth up to $40 million.

Nifty notched up much of his fortune as an investment banker, after leaving politics in 1986.

The court has previously heard Mrs Hickson Wran owns much of the property in the notional estate and under her late husband’s final will is the beneficiary of certain personal effects as well.

Prospects for a happy settlement don’t appear bright. Harriet’s lawyer said obtaining instructions from his client was “not straightforward” as she is currently on remand charged with the murder of drug dealer Daniel McNulty.

Ms De Poortere’s lawyer said his client couldn’t afford to pay the fees for mediation, prompting Justice Hallen to recommend the bill be paid for by the estate in the interim.

Talks are expected to take place over the next six weeks: if they are unsuccessful, the dispute is likely to be played out in a very public trial.