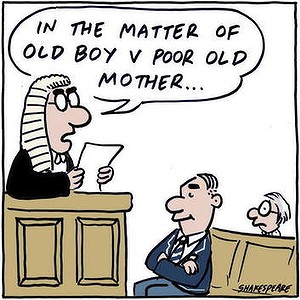 An old boy from The King’s School who sued his mother for a share of his grandfather’s $5.5 million estate has been castigated by a Supreme Court judge for having a ”highly developed and unhealthy sense of entitlement”.

Robert Wilcox, 46, and his younger brother Benjamin sued their mother Patricia after their late grandfather left his rural estate to their mother.

Benjamin settled his case but Robert’s claim proceeded to a hearing in February.

In a scathing judgment, Justice Michael Pembroke said that Robert was an ”unimpressive witness” whose ”unhealthy sense of entitlement may have constrained his ambition” to achieve financial success.

”Like many an expectant heir before him, he has not made the most of his opportunities, imprudently assuming that he and his brother would inherit their grandfather’s estate,” he said.

Robert had been given a ”better start than most young men could have expected” and his tuition and boarding at The King’s School had been paid by his grandfather.

The court heard Robert had been self-employed since about 2001 and was living in shared accommodation at Darling Point. At a hearing in 2012 he said he was living in a garage, sleeping in a swag and had virtually no assets.

Justice Pembroke said that ”no one is responsible for the position in which Robert Wilcox now finds himself, except himself” and he doubted he was ”sufficiently motivated to find work”.

The grandfather left his estate to his only daughter in the expectation that her sons would inherit it when she died. “Unfortunately, instead of waiting for events to run their natural course, the sons sued their mother … resulting in unquantifiable family discord, substantial cost and considerable hardship,” Justice Pembroke said.

“Unfortunately, instead of waiting for events to run their natural course, the sons sued their mother … resulting in unquantifiable family discord, substantial cost and considerable hardship”

In an earlier judgment, he noted the sons “not only claimed everything from the [grandfather’s] estate, but had given virtually no consideration to what should happen to their mother”, who had lived on the land all her life.

Affronted by the court case, she cut both sons from her will but she later relented for Benjamin.

Robert gave evidence he could get work in the mining industry but would be “lucky to earn $100,000 net”, whereas he could make up to $2.5 million a year running the family agricultural business.

Justice Pembroke said there was “no adequate evidence” that Robert had tried to get work in the mining industry and he ‘‘had a wholly unrealistic belief’’ he could run an agricultural property.

He had “had no involvement with agriculture whatsoever since 2001” and had not “set foot” on his grandfather’s property, Allawa, since 2004. His grandfather died in January 2010.

Justice Pembroke found Robert was entitled to receive some money under state succession laws. He rejected Robert’s claim for $1.1 million but ordered he be paid $107,000 to clear a tax debt and seven annual instalments of $40,000 starting in 2016.