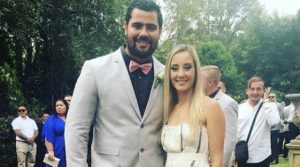 In Gosford Local Court in November 2017, magistrate Jennifer Price sentenced the 26-year-old mother-of-three to eight months’ imprisonment, with a three-month non-parole period, for misrepresenting her true circumstances. Read the original article on her sentencing in November 2017.

However, the magistrate adjourned the matter until January so Robinson can be assessed for home detention, in which case she would avoid any jail time.

With husband, former NRL player David Fifita looking on, a relieved Jade Robinson bowed her head as a magistrate told her today that she would not be jailed for fraudulently pocketing almost $50,000 from Centrelink when claiming to be a struggling single mum.

Gosford Local Court Magistrate Jennifer Price on Thursday said she had decided to sentence Robinson – also known as Jade Fifita – to home detention despite the consistent and persistent way she had greedily rorted the system at taxpayers’ expense.

Robinson, 26, used the single-parent Centrelink payments to buy clothes and a new car to try to keep up an outward appearance of success.

She pleaded guilty to two counts of receiving financial advantage from a commonwealth entity after she was found to have fraudulently received $48,500 in Centrelink benefits over almost five years.

Robinson was sentenced in November 2017 to eight months’ jail with a non-parole period of three months but the case was adjourned until Thursday so she could be assessed for home detention.

Ms Price, who handed down her decision via audiovisual link from Port Macquarie Local Court, said she would exercise her discretion and allow Robinson to serve her sentence via home detention.

The magistrate said Robinson would have to contact the Blacktown Corrections Services department office as soon as she returned home from Gosford to alert them that she had started her home detention.

Part of Robinson’s home detention conditions included reporting to Blacktown police station within seven days to be photographed and fingerprinted.

Ms Price said if Robinson failed to abide by the conditions of her home detention, the Director of Public Prosecutions could apply to have the order revoked and have the mother of three sent to jail.

Robinson had first claimed her first single-parent payment in September 2011 and continued to receive benefits until May 2016.

She briefly stopped claiming the payments for a few months in 2013 when she lived in France where Fifita was playing rugby league for French club Lezignan.

Robinson had her payments reinstated on their return to Sydney in June 2013, despite Fifita signing with NRL club Cronulla.

Fifita, the twin brother of Cronulla prop Andrew Fifita, now plays for Wakefield Trinity in the English Super League and was given time off from pre-2018 season training to be with his family over the Christmas-New Year period before his wife’s court appearance on Thursday.

He and Robinson have been together for more than 11 years and have three young children.

Court records showed the couple were married in Thailand in 2014 but Robinson told Centrelink their wedding was in April 2016.

A psychological report found Robinson had “a personality profile that reflected a lack of maturity” and an “inability to extricate herself out of the situation she had caused herself to be in”.

The report stated she “felt the competition to clothe her children … buy a new car and to keep up with others in social activities” but had no narcissistic or antisocial indicators and showed good prospects of rehabilitation.